The face of travel in Europe is changing. No longer simply associated with ‘bucket and spade’ holidays, European destinations are now embracing a revolution that has seen luxury resorts flourish. Spain, Portugal, Greece and Montenegro have perhaps been previously overlooked by holidaymakers seeking a decadent getaway, but a selection of resorts that can easily rival those found in places such as Dubai and Mauritius have put Europe firmly on the luxury map. Here’s The Kenwood Travel run-down of eight resorts that are changing the way we see exclusive European luxury.

Mandarin Oriental Bodrum is one of Turkey’s premier resorts. The clever design results in outdoor and indoor spaces seamlessly blending to give the impression of space. This extends to the guest rooms, the smallest of which still measure in at an impressive 72 square metres, where contemporary touches and comfortable furniture combine to provide you with a home away from home on your holiday in Turkey. Despite its location close to many of the region’s most popular sights, prying yourself away from the resort could be rather difficult. One reason is the 2,700 square metre spa featuring Mandarin Oriental’s signature take on wellness and rejuvenation. This award winning spa utilises unique holistic therapies and treatments to replenish the bodies, minds and souls of all who visit. 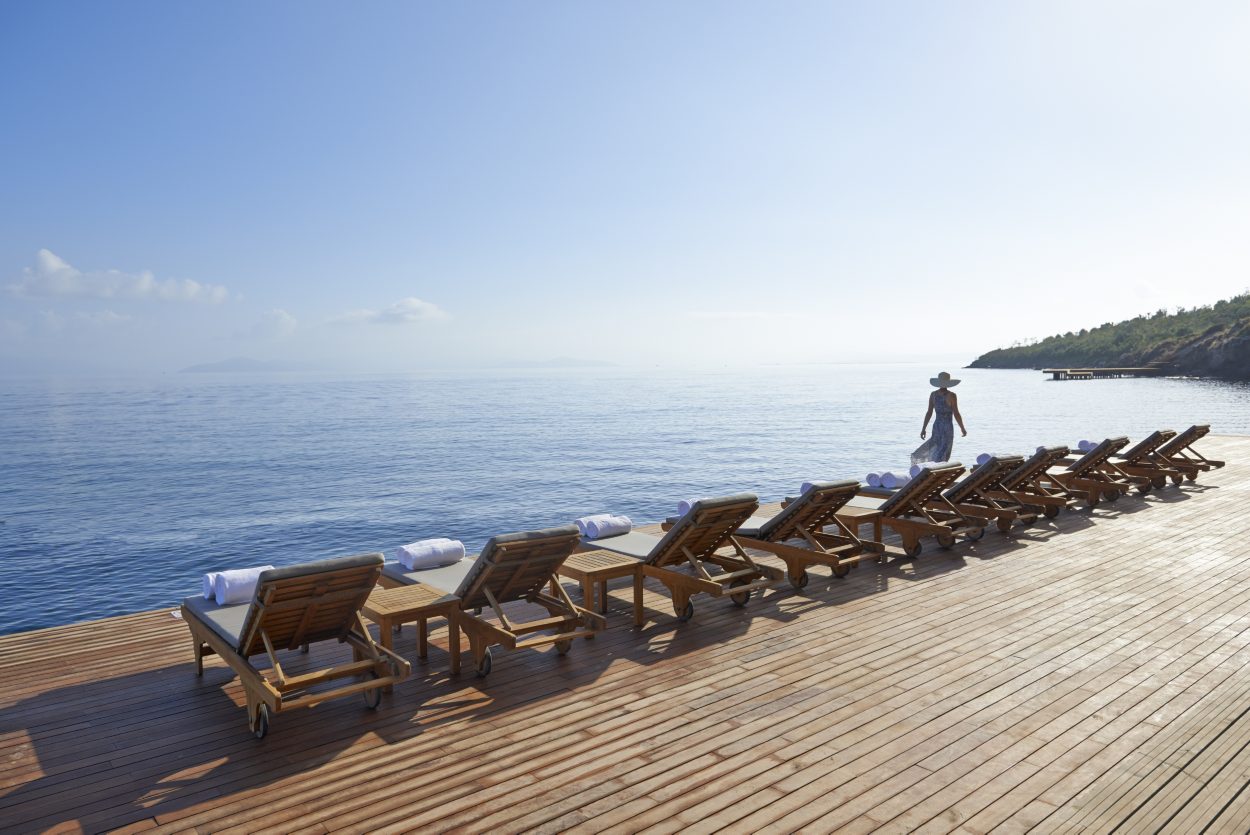 The visually stunning Iberian Peninsula in northern Portugal is where you’ll find Six Senses Douro Valley. Originally a 19th century manor house, this wonderfully converted property is home to a spa, a selection of beautiful rooms and villas, world class restaurants, and much more to make holidays in Portugal even more special. The region surrounding the hotel is well known for its wine production and guests are offered the chance to spend a day with a winemaker to learn more about this wonderful produce of Portugal. You may even be asked to stomp a few grapes! Back at the hotel, there’s no better way to try the region’s much revered wines than by enjoying them with an expertly prepared selection of regional dishes from The Restaurant. 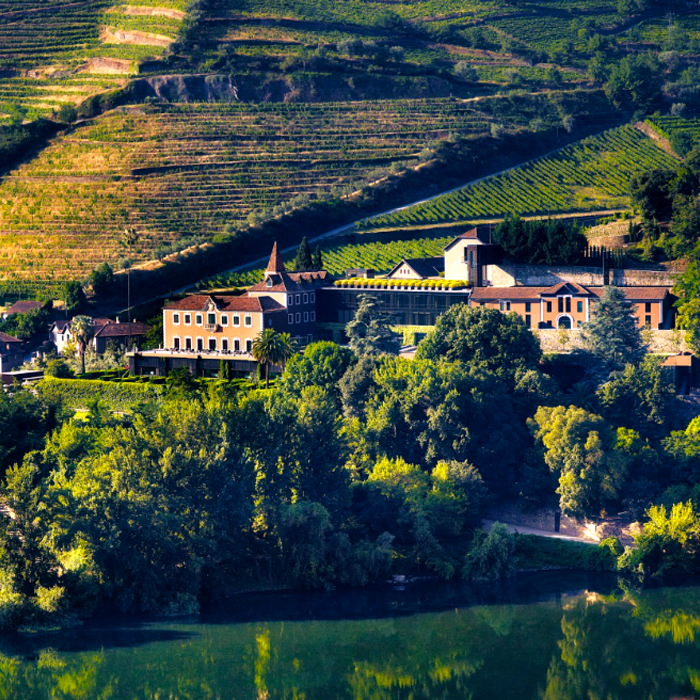 Holidays to Ibiza strike the perfect balance between work and play. ME Ibiza embraces this with a selection of VIP experiences as well as laid back indulgences. For the relaxing side of your Ibiza holiday, look no further than ME Ibiza’s SkinC Spa. A particular highlight here are specialised skin consultations where youthfulness is restored via the use of concentrated Japanese serums. For more action-packed pursuits, why not try one of the resort’s Exclusive Experiences? Opt for the ME Terrace in Formentera and you’ll be whisked away via boat to the island of Formentera where you can enjoy a fabulous beach with full catering provided. The resort’s location in Santa Eulalia, Ibiza’s third largest town, gives you easy access to art galleries, exclusive shops, the marina and of course the entertainment Ibiza is so famed for. 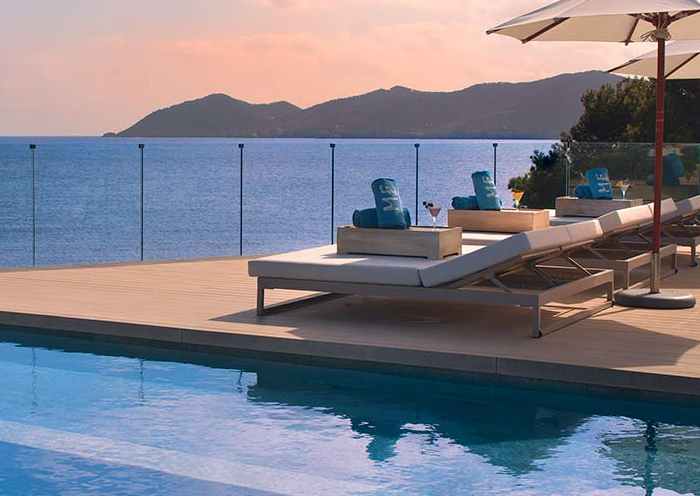 Laid back days by the water characterise visits to ME Ibiza

Presiding over both the town that lends the hotel its name and the azure Mediterranean Sea from its cliff top location, Jumeirah Port Soller is a magical place to spend holidays in Majorca. Incredible views of either the sea or the dramatic mountains can be enjoyed from each of the hotel’s 121 rooms which boast an array of amenities, such as complimentary WiFi and 42” televisions, to make your stay extra luxurious. Nestled amongst the hotel’s charming surroundings you’ll find the Talise Spa where massages, facials and beautifying rituals are just waiting to restore your Zen. A celebration of Spain’s culinary traditions is always under way at Port Soller. Balearic wonders are served at Cap Roig including golden pork belly with green apple shavings. 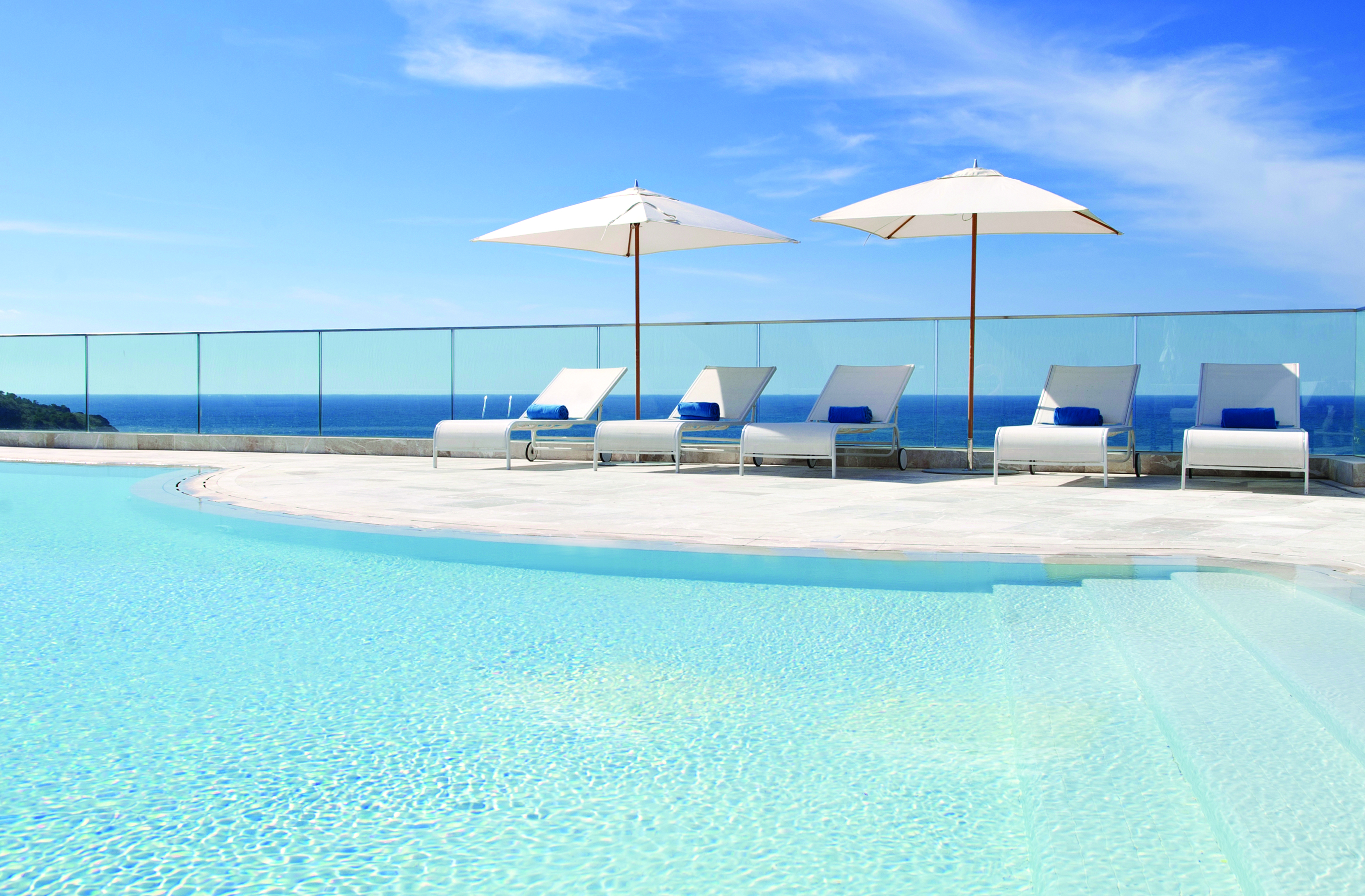 Jet off to the Greece’s largest island, where fortresses and Greek mythology sit side by side with local fishing villages and restaurants. Nestled beside a picturesque bay and overlooked by typical Mediterranean greenery, Daios Cove resort in Crete has a charming appearance and a sophisticated substance. The resort oozes style in the form of sublime à la carte dining, a luxury concierge service and the most sought-after spa on Crete, by Anne Semonin. Take a break from the tranquillity and sample watersports in the Sea of Crete including water skiing and scuba diving. Discover the colourful marine life, and once you’re back on dry land slip on your dancing shoes, let your hair down and party the night away to Daios Cove’s live entertainment and DJ nights. 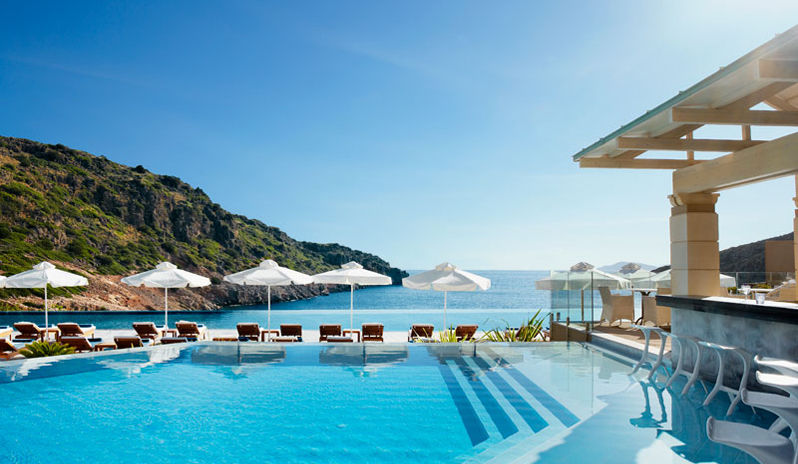 Regent Porto Montenegro is found right at the centre of arguably the Mediterranean’s most exclusive marina. Classical renaissance design runs throughout the hotel, enhancing the sense of luxury you’re bound to feel when you enjoy a holiday to Montenegro. A relatively small hotel, Regent Porto Montenegro contains a total of just 51 rooms and 35 suites meaning that you’ll be treated to intimacy amongst the grandiose surroundings. During your visit a dip in the twenty metre infinity pool is a must, as is a trip to the Regent Spa where a Turkish hammam is on hand to cleanse both body and mind. Dining here is always a treat; sample the dégustation menu at The Dining Room and you’ll be taken on a culinary master-class that spans six delectable courses. 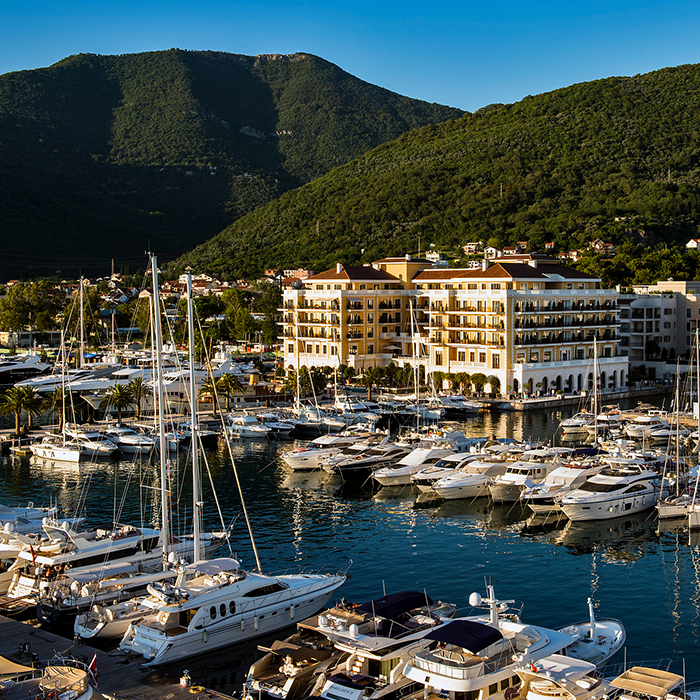 Porto Montenegro has become a playground of the rich and famous in recent years.

The exclusive feel at Grand Hotel Angiolieri on Italy’s stunning Amalfi Coast can be traced to its colourful history. With its previous incarnations as an ancient Roman house, a monastery and latterly a highly sought-after stop-off for British nobility ‘Grand Tourists’, this building is an immutable piece of Sorrento’s cultural landscape. And its popularity as a luxury hotel today owes much to the fidelity with which its décor and furnishings manage to honour this fascinating legacy. Guest room interiors use a combination of barrel vault ceilings, richly weaved tapestries and solid walnut beds with sculpted headboards to transport visitors to the decadent days of yesteryear. Outside meanwhile, cloistered terraces overlook the Med and post-modern sculpture adorns the pool and garden areas for a classic yet cutting-edge take on architectural design. 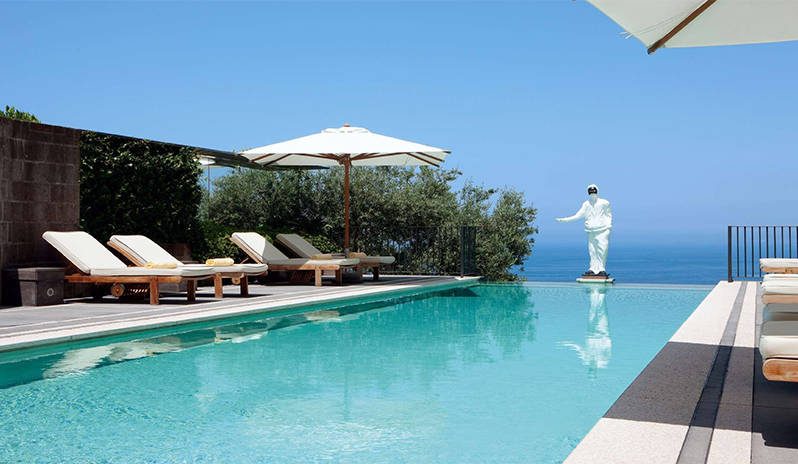 Anantara is coming to Europe. This Far East superstar hotel-chain opens the doors of its debut European entry soon, and it’s set to change luxury holidays to Portugal forever. Anantara Vilamoura, located just a few minutes from its namesake,  embraces its artistic heritage. Think lobby sculptures, a roman-inspired spa, artwork, installations and more on the scenic Algarve coast. It offers breathtaking views across the Arnold Palmer designed Oceanico Victoria golf course; five swimming pools, three of which are outdoors with tropical-themes; and World-class Adventurers kids’ and teens’ clubs.  Throw in Anantara’s world-famous Asian hospitality, area excursions which include whale boat trips, plus a seamless blend of European and Asian inspirations and you’ve got yourself a luxurious European getaway of a lifetime. 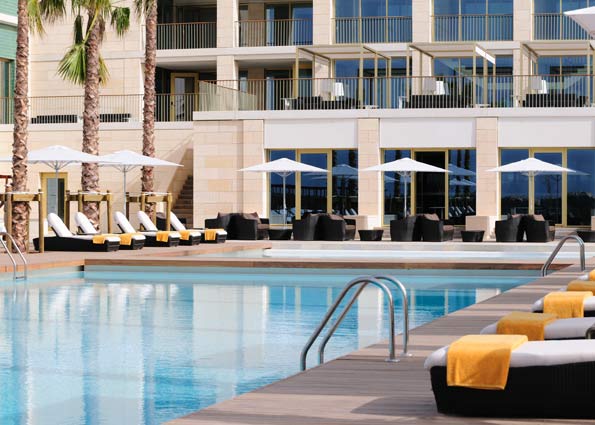 One of five pools at the luxurious Anantara Vilamoura Algarve.

A stay at any of these resorts will prove beyond doubt that holidays in Europe can easily compete with long haul destinations whose luxury credentials are more firmly established. To find out more or to book a holiday, give us a call on 020 7749 9220 or visit our website.