Our Andrea does a lavish warm up to Christmas in New York and discovers some cheeky budgeting tips. And to coincide we have some great fares on Virgin Atlantic and British Airways flights to New York, listed below.

“Sunday was the perfect day for me. Unseasonably warm, the sunshine was absolutely beautiful, and I got to go on a horse and cart around Central Park!”

Like a little girl with her new pony our Sales & Product Manager Andrea giggles with excitement on returning from New York. 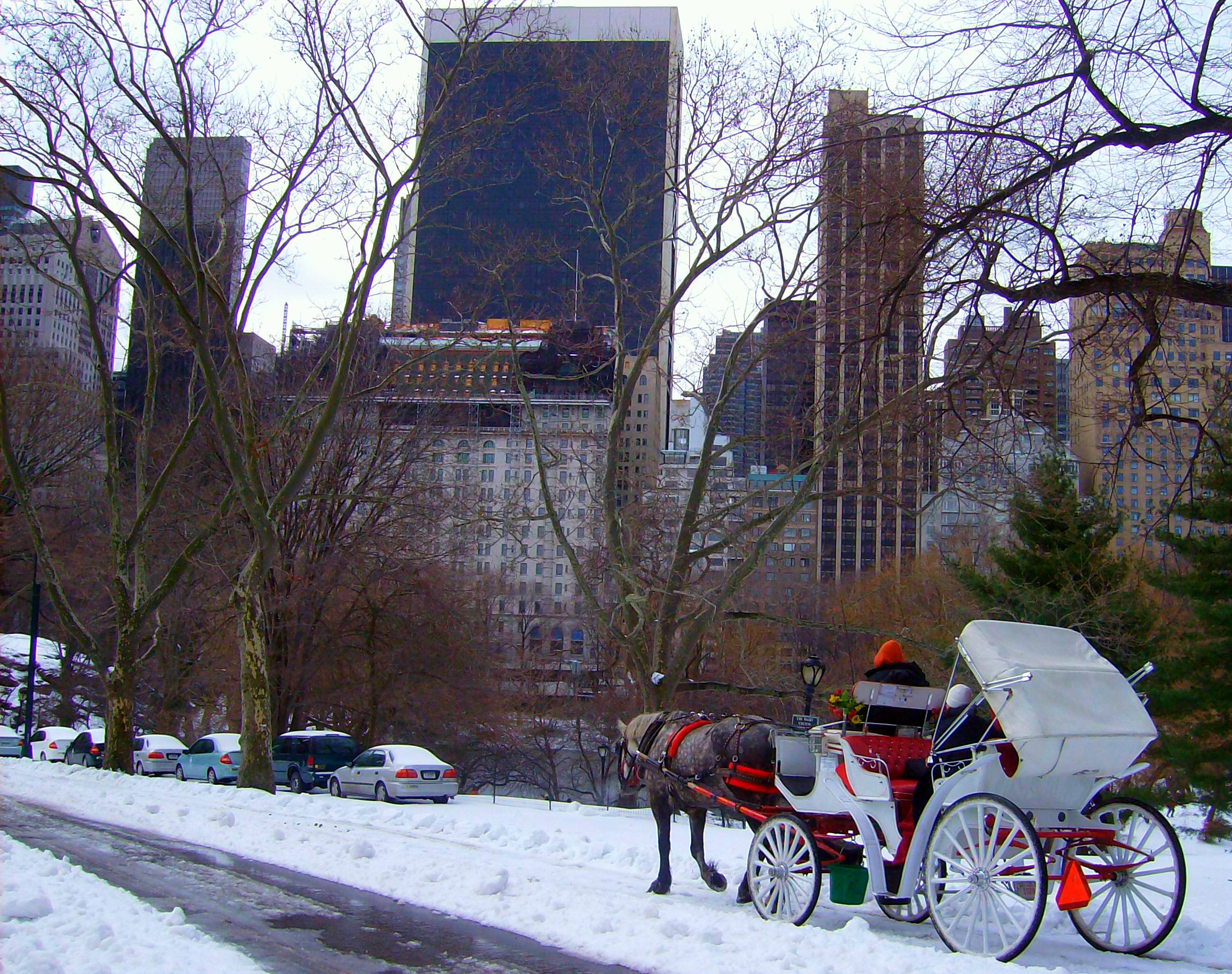 At a $50 flat fee between six for the horse-drawn carriage, this isn’t bad. It’s a quick, 20-minute addition to your Christmas in New York sightseeing route that ranks high on the memorability scale. It could be a movie scene, pick your wintry rom-com. Skyscrapers peek over the park canopy. Joggers and walkers circle you to the clip-clop of plodding hooves from within a mist of chilled breath. A quintessential Fairytale of New York.

“It’s well worth it. You can get six in there; they give you big red blankets to cosy up under. It’s like a film – we passed several scenes from Home Alone 2.”

That would be the Wollman ice rink and The Plaza. Oh, and the bit where Macaulay Culkin meets the pigeon lady. Ok, that’s more ‘com’ than ‘rom’, but we’ll chalk that up to success nonetheless.

But that wasn’t the only frugal and fun fare Andrea found in the Big Apple. In fact over the course of checking out a couple of our New York hotels she has, perhaps unwittingly, stumbled on some worthwhile tips for doing an upmarket tour of New York for less. In other words the budget tour that doesn’t feel like you’re on a budget.

First stop – the airport. It usually is. And a Friday afternoon does not an empty airport make.

“It took two hours to get through immigration. Doesn’t usually take that long but it seemed like every flight in the world was landing at JFK right then. They were doing renovations so passengers had to get buses from the plane to the terminal, which all bottlenecked on the runway.”

In any case, US immigration is always a mixed bag. Whilst Americans are a friendly lot, ironically the immigration officer, i.e. the first one you meet, seldom shares that same outlook on hearty warm welcomes. After two hours’ wait followed by a stern grump, you’ll want some respite. Time to start laying on the lavish.

“We took a limousine into town. It was actually the same price between six of us as an SUV transfer would have been. And then out of nowhere they upgraded us to a 12-seater. Basically instead of getting two yellow cabs from the airport, for an extra $5-ish each we all jumped into this massive white Hummer!”

And if you’d like a massive white Hummer to pick you up at the airport, just ask one of our agents when you book a holiday. We’ll sort it out. We’re very resourceful.

Andrea and her companions stayed at the Grand Hyatt, round the corner from Grand Central Station. This towering façade of mirror-faced blocks looks a bit like a game of Tetris in chrome. It’s unashamedly magnificent as the distinctive Art Deco peak of the Chrysler Building pokes up from behind the stylish New York hotel.

You’re exceptionally close to all the biggest attractions in New York at the Grand Hyatt, and the views from the upper rooms are nothing short of breathtaking. Interestingly though, it is here amongst this 5-star milieu that one finds the unlikeliest of budgeting tips.

“We upgraded to the Executive Floor. What people don’t realise is you get a free all-you-can-eat buffet breakfast in the Club Lounge, free bottles of water and fizzy drinks, afternoon canapés and snacks like cheese, salami, hams, breads. Plus you have this haven to come to back to after or hang out in during the day.

So where you pay a little more for the privilege it seems you can save a packet on food. Though perhaps don’t rely on this as a definite money-saver if you’re not a blini sort of person.

In kind, that evening’s meal sought to stay sparing and central. Good cheap eats around Times Square come not from New York’s beating heart but the tiny capillaries that connect it. The gang found delicious homely food at great prices on a tiny side road, the bumbling hum of Christmas in New York providing background music rather than fanfare.

Early night that night, and the next day was proper sightseeing.

“What I did prior to going, which I don’t think many people do, is we pre-purchased the CityPASS. You get a voucher, collect your booklet and then queue-jump all the attractions. It does save you money, the one we bought was valued for three days.”

Doing enough stuff, and there is indeed plenty, will quickly warrant the $89 you pay for CityPASS. 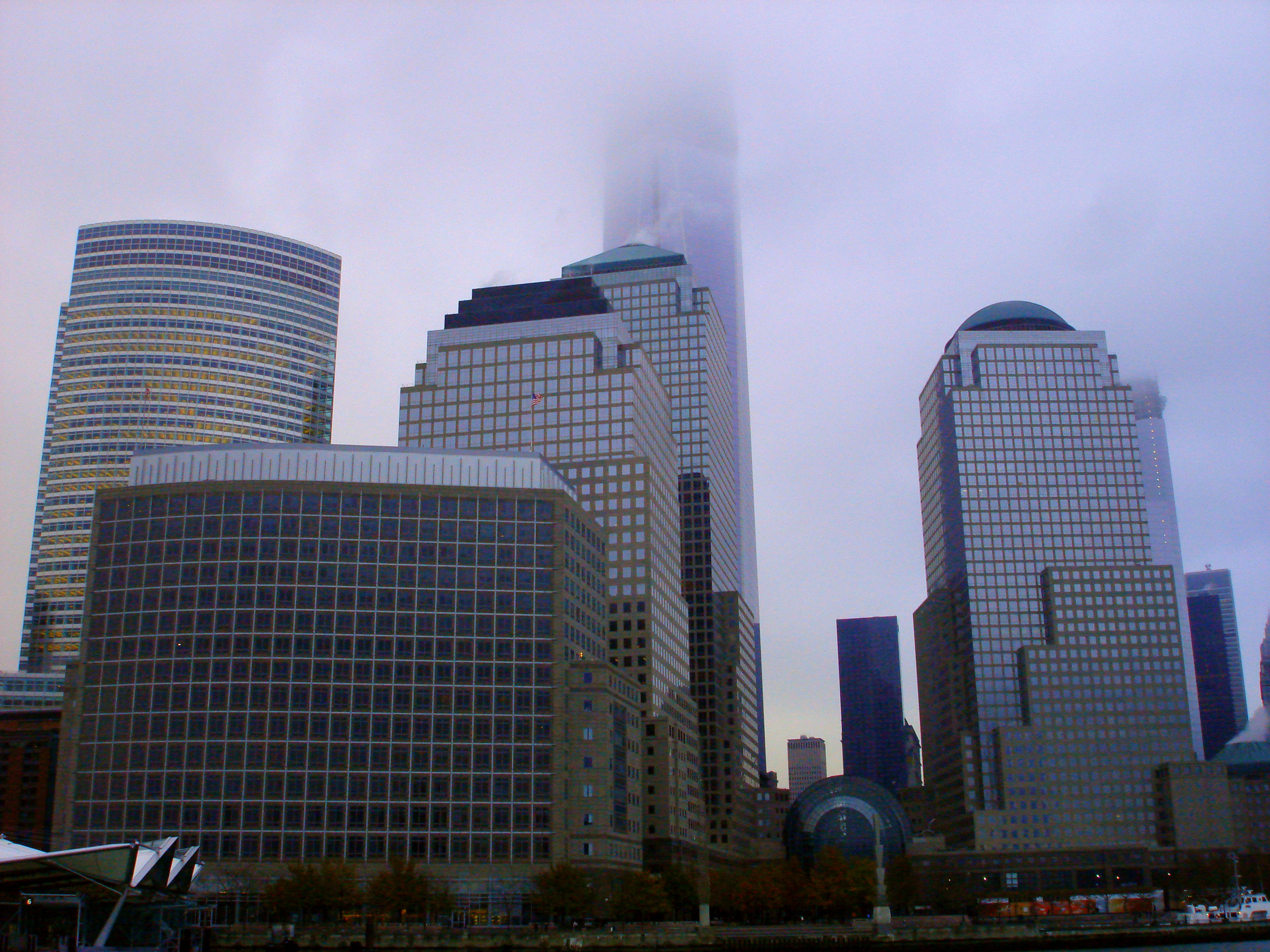 “We also purchased hop-on-hop-off bus passes for one of the bus routes that we did. There’s a downtown loop and an uptown one depending on what you want to see. And – though we didn’t realise this until after we’d got back – at the back of the CityPASS booklet is a voucher to get an extra $5 off the bus pass.”

The bus dropped the group off around Central Park, where they headed inwards. After all, Christmas in New York wouldn’t be Christmas in New York without some ice-skating, and the park has enjoyed skaters on its ponds since its inception. The weekend rate is $17 for adults. The budget option is an $11 rate from Monday to Thursday. 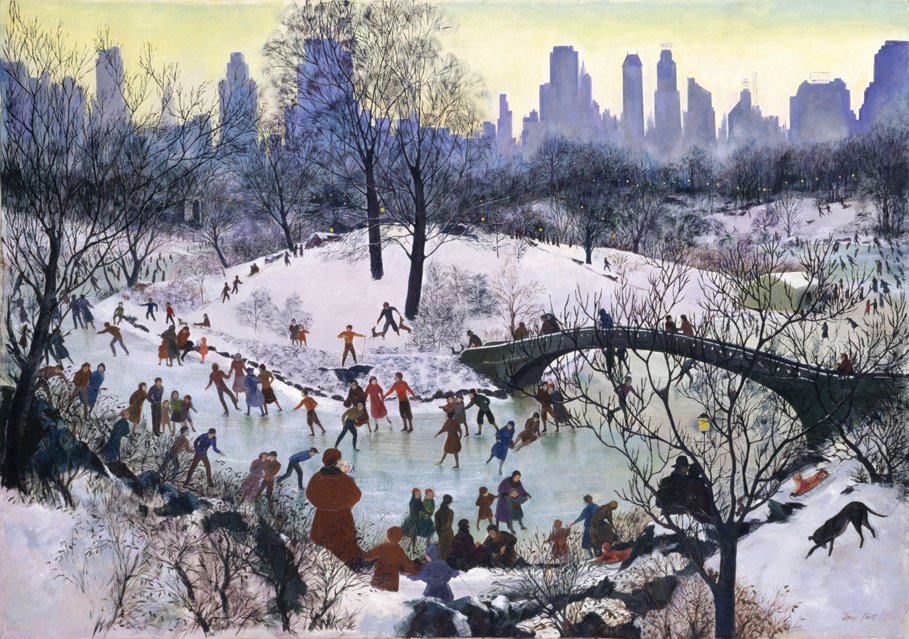 “That night we went for food at the Gansevoort Park Avenue. Their Italian restaurant Ristorante Asellina is absolutely brilliant. We had a few drinks on their rooftop bar, which was wonderful.”

Finally, the group also visited Ground Zero. It remains free entry, but simply due to the crowds you will need to book a place before you get there. Your hotel concierge will be more than happy to arrange this. 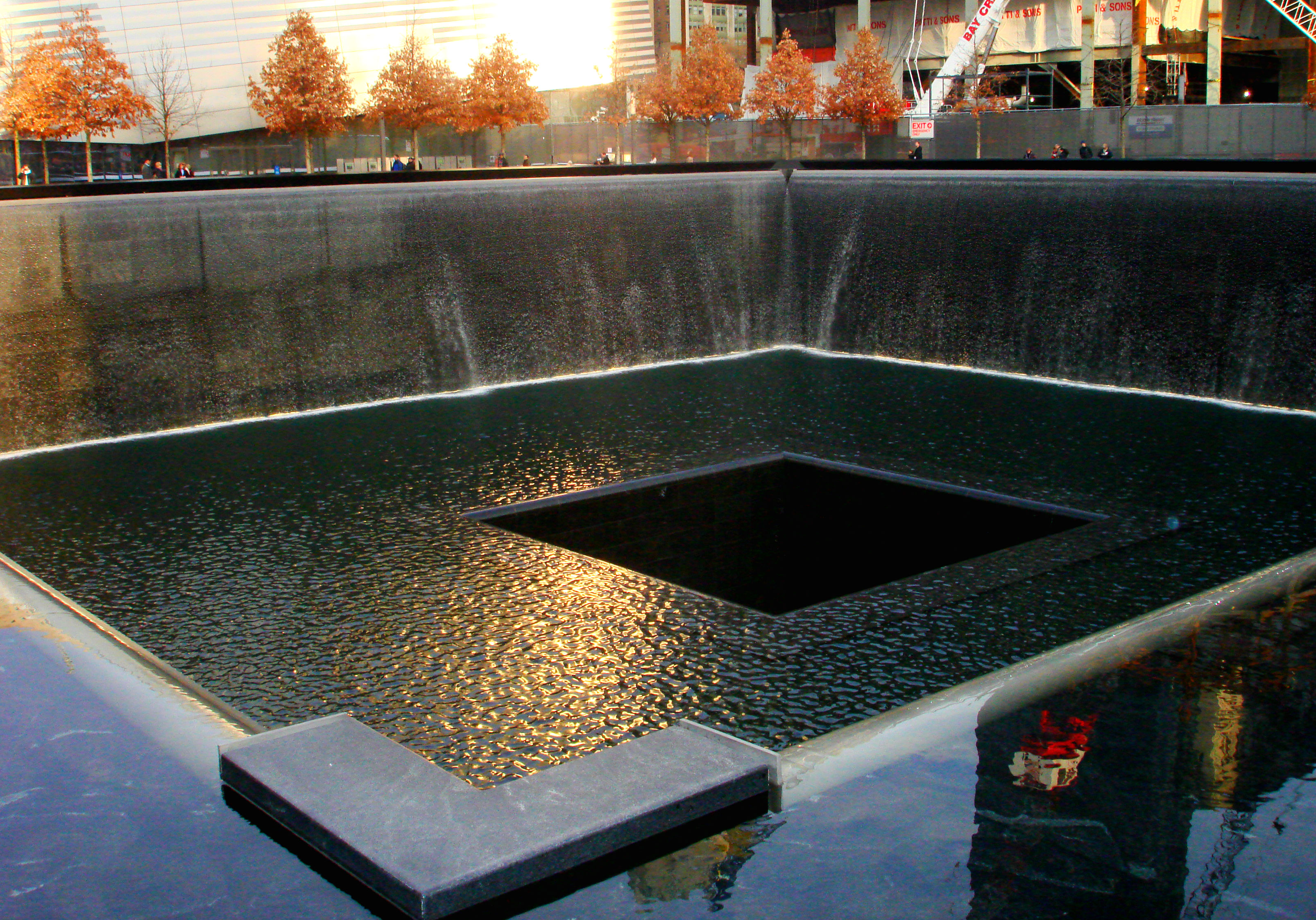 As you enter, Andrea explains, seeing the two reflecting pools where the Two Towers once stood, the plaques of victims of the atrocities’ names, and One Trade Center, the towers’ near-complete and iconic replacement, the feeling is quite overwhelming.

“Very sad, I think is the only way I can describe it.

“Just before going in there’s a church which became a focal point during the attacks, people were sleeping and seeking cover in there. It’s been turned into a museum and the pictures in there are extremely humbling.

“There’s in fact a tree on Ground Zero that survived, so they’ve replanted and grown it, completely surrounded it in protection. It’s quite amazing.”

A hurricane hit a few years ago and knocked the tree over, but still it lives on, a powerful symbol of undying hope.

Christmas in New York deserves to be seen from the ground, but after nine hours of walking around New York that day, Andrea and the group deservedly got the bus back to the hotel. Only to make a final unexpected pit stop, with another arborary icon.

“We stopped near the Rockefeller Center and I was convinced someone famous was turning up. The crowds were enormous.”

Why is everyone gathering here, she casually asked somone. He pointed upwards, remarking glibly:

And if you don’t know which tree they mean, why not rent Home Alone 2 tonight? 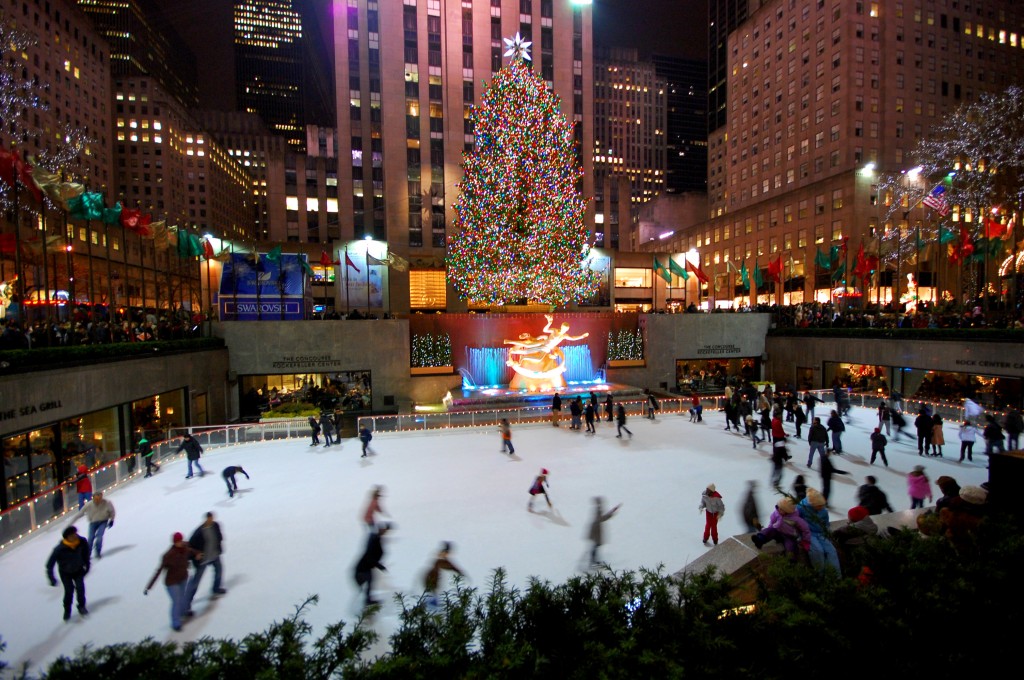