It’s a fact that some of the most beautiful destinations in the world are part of coral atolls – those circular or oval coral formations that look like giant white crowns adrift on the ocean.

Take the Aldabra Archipelago in the Indian Ocean as an example. This natural wonder consists of four main islands and encloses an expansive shallow lagoon that contains many other small islands. With 34 km in length, about 15 km wide and up to 8 metres above sea level, it’s one of the world’s largest raised coral atolls.

If you go to the Seychelles you may as well visit this UNESCO World Heritage Site, famous for its giant tortoises and unique views.

But, have you ever wondered how coral atolls are created? You may think that this is a thousands-year long process where many different conditions must be present for these reefs to form. Well, you are right, their evolution is painfully slow and it doesn’t happen everywhere, the sky for being one. Here is the coral atoll formation process step by step:

If you’re going for a swim, you would surely like to enjoy plenty of sunshine, clear waters and warmish temperatures – say around 23-29C. Coral likes these conditions too. That’s why you will normally find them between 30 degrees north and south of the equator: proper tropical latitudes.

Once the geographical location problem has been solved, there are other factors to consider. Strangely, reefs grow best in waters that are poor in nutrients. This is because too much suspended materials – including plankton and other microscopic animals – block the sunlight necessary for the algae’s photosynthesis.

Hold on, photosynthesis? Aren’t corals animals? This is a tricky one. Hermatypic corals – the only ones that build reefs – are a symbiotic collaboration between a coral animal and zooxanthellae. This last organism, apart from having a complicated name, has an even more strange behavior. It’s like a good parasite that provides its host with up to 90 per cent of its energy requirements through photosynthesis.

Corals then secrete a hard skeleton under their skin that will eventually constitute the reef, a structure that in ideal circumstances can grow up to 3.9 inches a year. 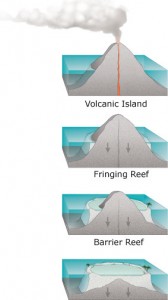 Now that we have the reef, how do we make it circular?

Atolls are the final stage of a reef that has outlived an island. The first step would be the formation of a fringing reef along the shoreline of a tropical island, and from this moment on, the following might happen:

Think of a fresh-baked cake with a hard crust around the edges that goes flat in the middle after being removed from the oven. The same happens to an island when the volcanic forces that created it recede, and erosion plays its role for a long period. We then get a barrier reef, a kind of surrounding crown with water between it and the island.

Finally, if the island completely sinks below the surface of the ocean, what we have is just the reef surrounding a shallow lagoon, or a coral atoll.