As a holiday destination, Mauritius is a water-sport enthusiast’s dream come true. Courtesy of its abundant and colourful marine life, historic shipwrecks and beautiful beaches, thousands of visitors flock to the country each year to explore the aquatic underworld of the Indian Ocean. 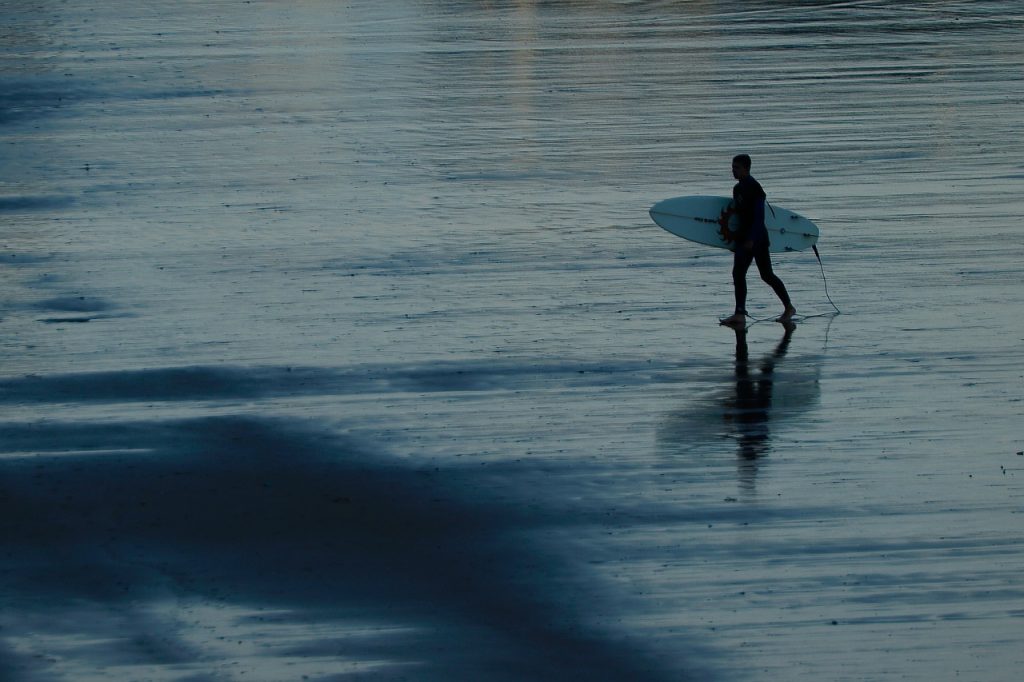 The island is widely regarded as one of the finest luxury holiday destinations on Earth, and rightfully so. Mile upon mile of white beaches are cradled by a calm, crystal clear sea. In the north – the area that the majority of tourists visit – you can enjoy a wide array of activities, from parasailing to water skiing and even underwater scooter cruising. For the surf, however, you need to head south.

It is no surprise that Mauritius has gained a reputation for its pristine beaches and sunny climes. However, if you are a surfer, Mauritius is so much more than a beach holiday destination. For those chasing the best breaks and swells, it is the waters that feed this island that are the main attraction.

Surfing has been ingrained into local life in Mauritius for decades, and has been a key draw for visitors for almost 60 years. In this article, you can discover everything you need to know about this fantastic surfing spot in the heart of the Indian Ocean.

The stunning Morne Brabant rock formation overlooks many of the finest surfing areas in Mauritius. Towering 556m above the ground and falling away dramatically into the sea, Morne Brabant creates an incredible hammerhead shark-shaped peninsula, adding atmosphere to every surf. 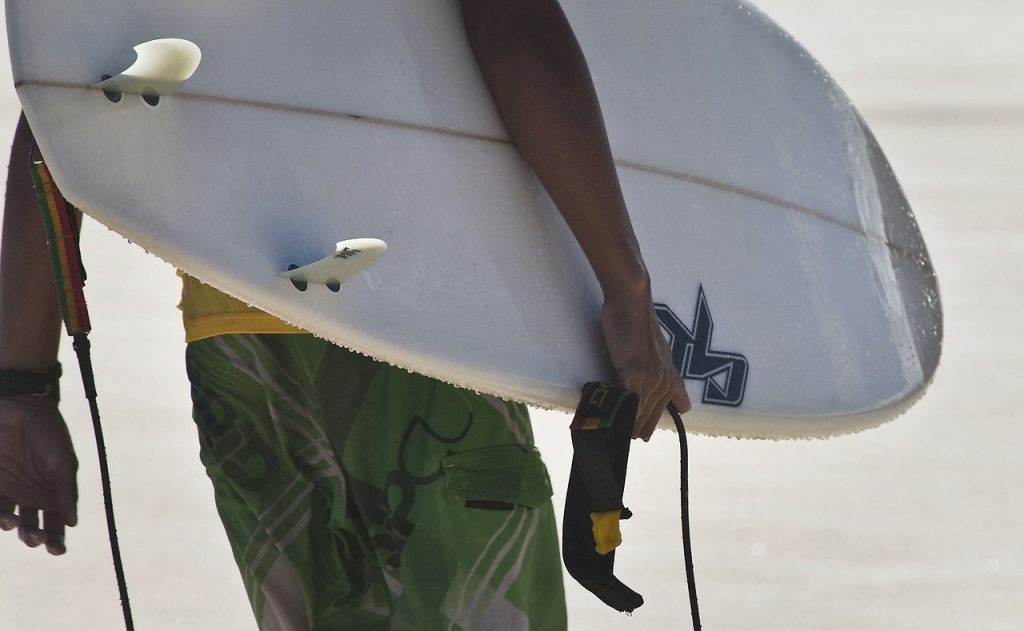 The now-popular Tamarin Bay lies on the south-west coast of Mauritius, but until the 1960s it was relatively unknown. Surfed only by locals and the most hard core Australian surfers, Tamarin Bay was a hidden treasure of a cove.

It wasn’t until the 1974 cult surfing documentary The Forgotten Island of Santosha exposed Tamarin Bay’s infamous 10-foot wave that the Bay became more widely known. Its left-hand reef break became legendary, and surfing enthusiasts from around the world began placing the Bay at the top of their bucket lists.

Since the ’70s, the currents and wind patterns around the Bay have changed, making the surf somewhat inconsistent for those hungry to relive the swell presented in the documentary. Instead, surfers began heading for the nearby island of Réunion. Nonetheless, Tamarin Bay is still widely regarded as a world-class place to surf.

Tamarin Bay is certainly a spot for more experienced surfers, but there is a local surf school for children or first-timers who are keen to learn surfing during their holiday to Mauritius.

Unlike the northern side of the island, this area of Mauritius has not seen the same level of development that you would expect of a tourist destination. Instead Tamarin Bay has maintained the authentic and unique vibe that makes it perfectly suited to a surfing community.

If the inconsistencies of Tamarin Bay leave you feeling a little out of your depth, then the surf at Le Morne Peninsula will be your saviour. Le Morne is home to some of the best swells on the island, yet is arguably more hospitable for novice surfers than areas such as Tamarin Bay.

Tucked away in the farthest south-westerly corner of Mauritius, Le Morne will greet you with the call of the Roaring Forties – the strong westerly winds found in the Southern Hemisphere. But you will also be welcomed by regular swells of impressively high waves.

“Mauritius is home to a world-class windsurfing spot — right next to the St. Regis on Le Morne Peninsula. As long as it’s not too windy, you can paddle past the lagoon to One Eye for some of the best waves in Mauritius.” 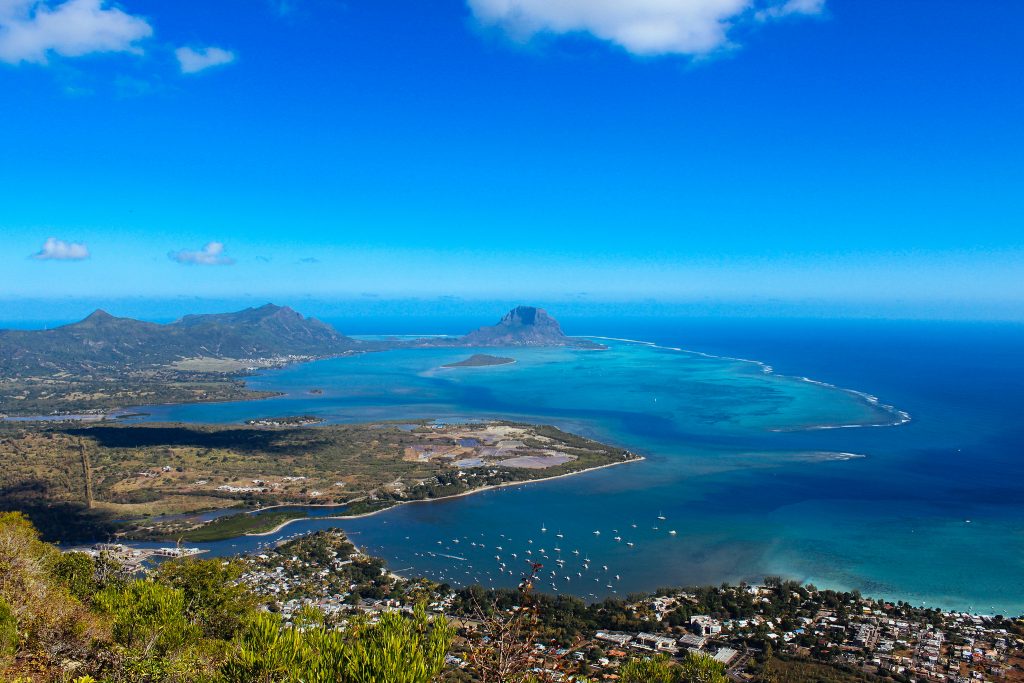 Sheltered by Le Morne Brabant Mountain, this area has fewer rocks and less prominent reefs, meaning beginners can ply their trade here with ease. The conditions range from lagoon-like calmness to more hard-core swells, perfect for those seeking a challenge.

As Christy recommends, experienced surfers should head out to One Eye. This is an exposed reef break that can be found in front of the St. Regis Hotel. To make the most of the superb swells, tackle the waves at high tide with some extremely fast currents to propel you. Surfing legend says that if you manage to catch the perfect wave at One Eye and can ride it to the top, you will be rewarded with a clear view of the break in the reef and the opening, or ‘eye’, in the face of Le Morne Mountain.

Further out to sea is Manawa. Best reached by boat, this is another exposed reef break like One Eye. Here you are treated to consistent large waves and strong south-easterly offshore winds.

What puts Rivière des Galets among the best surf locations in Mauritius isn’t only the waves, but is also the peaceful atmosphere of the area. This part of the island is certainly one of the least developed, and the community remains truly in touch with their natural surroundings.

Countless subtle surprises can be found in the Rivière des Galets. Its pebble beach is unique within Mauritius, creating a charming contrast with the surrounding smooth sands. Here you can not only surf yourself, but also relax and watch several competitions throughout the year featuring the world’s top surfers.

The climate of Mauritius makes it an alluring destination for those searching for sunshine without the risk of extreme weather. Unlike other countries that experience the monsoon season, Mauritius does not experience heavy periods of rain. Instead, the rain is spread over the course of the year, with moderate rainfall occurring during the evenings. Further still, there is a very low risk of cyclones in Mauritius, despite having one of the highest temperature averages in the world. Fortunately for anyone following our guide to surfing in Mauritius, the east coast does tend to be a drier area than the west. 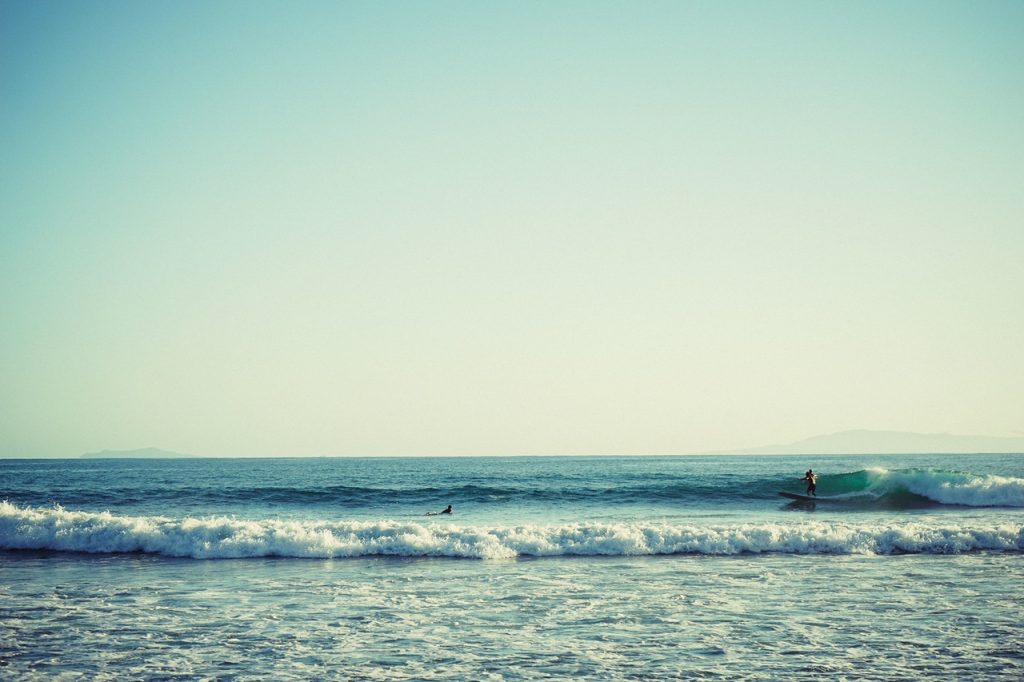 The average yearly temperature sits at a very comfortable 25 degrees Celsius, while the water temperature ranges from 22 to 27 degrees. This means that the sea is generally suitable for board shorts and swim suits, but during the winter months you may require a spring wetsuit.

South-westerly swells can occur all year round, but during the Southern Hemisphere’s winter period they become more frequent and can vary in size from 2-10ft.

The summer season in Mauritius can be characterised by north-easterly tropical storms, but they are much less common than in other similar Southern Hemisphere countries. You can experience waves of 4ft on average during the summer period, but for the most significant tides you should head to the shallow spots.

For more information about when to visit Mauritius, check out our recent infographic. 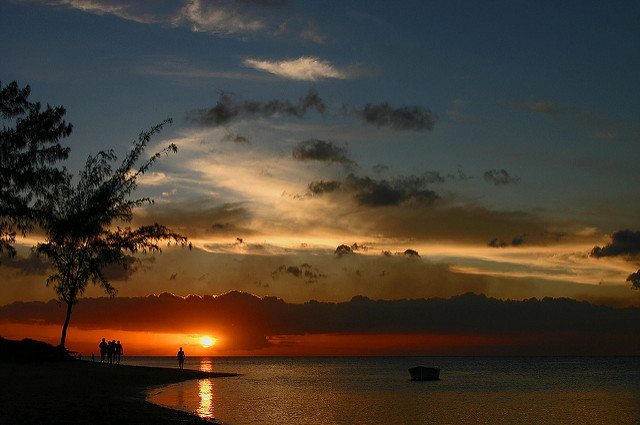 The History of surfing in Mauritius

Magic Seaweed is the oldest and most popular free online long-range surf forecast. They filled us in on the rich history of surfing in Mauritius:

“Mauritius has gained an exotic image in the heart of surfers thanks to 1974’s Forgotten Island of Santosha. The film focused largely on Tamarin Bay, a perfect wave that became a symbol of escapism. The spot had been surfed since the early 1960s, but the epic 8-10ft swell featured in the film captured the attention of the surfing world.”

Locals to Mauritius have been surfing for a very long time, but this did lead to a reputation for localism. During the 1980s and 1990s, white Mauritians or ‘White Shorts’ controlled the wave at Tamarin. Now, however, the waters of Mauritius are open to all, as locals and visitors alike enjoy the incredible swells side-by-side.

As much as Mauritius is a beautiful destination for those looking for the luxury holiday of their dreams, it is clear that the island also holds itself as one of the top must-see surfing destinations the world has to offer.