They cover 70% of the earth’s surface and are as challenging to explore as outer space. No wonder our oceans contain so many fascinating creatures. And as BBC1’s Blue Planet returns to our screens, it’s time once again to sit back and marvel at the wonders of the deep.

From surfing dolphins to bird-eating fish, some of the stars of Blue Planet II seem closer to science fiction than reality. Yet here they are, in all their crystal-clear glory thanks to pioneering camera technology (and new diving tanks that create no sound or bubbles). Yes, Sir David Attenborough’s Blue Planet team is back, gracing our Sunday nights with the sharpest marine cinematography ever captured. And the 2017 follow-up to the original Blue Planet TV series is already blowing the competition out the water. The opening episode left Strictly and X Factor in its wake with a whopping 14.1 million viewers.

We know the average traveller won’t be inclined to follow a cut-throat eel into a deep-sea brine lake à la episode 2, and that’s okay. There are plenty of less perilous ways to experience marine animals every bit as wonderful as those featured on Blue Planet II. Our Far East, Indian Ocean and Caribbean experts plumbed the depths of their destination knowledge to reveal not only which creatures to look out for, but also which hotels will add a bit of luxury to your underwater adventure.

Blue Planet’s wave-diving dolphins get their thrills off the coast of South Africa. In Hong Kong meanwhile, sightings of a mysterious pink coloured species have been recorded for over 300 years in the Pearl River Estuary. Today you’re likely to find Hong Kong’s pink dolphins in the waters around the Lantau or smaller Peng Chau islands. Pollution, habitat loss and boat traffic threaten their numbers unfortunately, but sightings are guaranteed on a Dolphin Watch Cruise. Cruises are operated year-round with regular Wednesday, Friday and Sunday slots. Not only is this ideal for spotting pink dolphins, it’s also a relaxing way to escape the bustle of the city. Best of all though, 96% of trips do enjoy successful sightings, and free replacement cruises are offered for those that don’t.

Where to stay: Keen-eyed guests might even spot Hong Kong’s pink dolphins from their harbour-view room at Kerry Hotel Hong Kong. Failing that, dive into the harbour-view infinity pool and take in the waterfront splendour of Kowloon and Hung Hom Bay. Four restaurants, a Tsim Sha Tsui East shopping location and a reputation as a fitness hub means Kerry Hotel is more than qualified to entertain you between dolphin spotting tours.

Pack your snorkel and embark on a tour of the beautiful Gili Islands in the Java Sea. Just 20 minutes from the mainland, this tropical triumvirate of castaway isles unveils kaleidoscopic worlds of Blue Planet wonder. Just beneath the surface, unspoilt reefs teem with colourful creatures from the miniscule to the majestic. Within this coral kingdom divers can expect to see parrotfish and butterflyfish alongside rare inhabitants such as mantis shrimp and pink-leafed scorpion fish. Indonesia is known as ‘the turtle capital of the world’, and its surrounding waters are go-to locations for spotting this iconic creature. Look out for hawksbill, olive ridley and green sea turtles on your Gili Islands diving expedition.

Where to stay: Amid the bougainvillea and thatched villas, The Oberoi, Lombok‘s rustic atmosphere fits in perfectly with its Medana Bay setting, overlooking Mount Agung. The hotel provides hosted snorkelling trips to the Gilis accompanied by a member of the Oberoi Beach Club. Duration: 3.5 hours, from 9am to 12:30pm / 1:30pm to 5pm. Supplement applies. 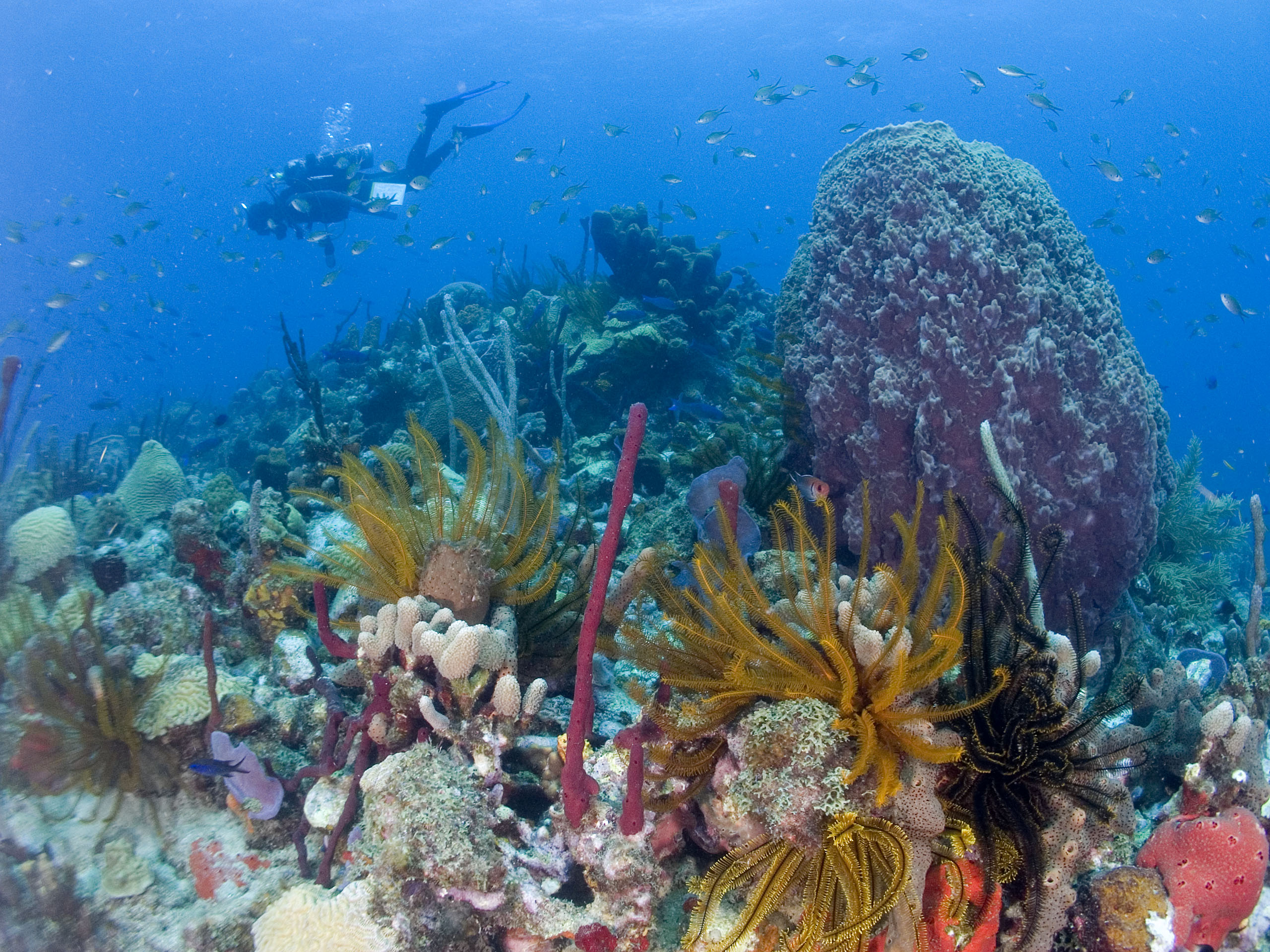 Away from the TV screens of Blue Planet, this reef diver gets a front-row seat to the wonders of the deep

Some of the most memorable moments in Blue Planet II occur when David Attenborough’s team showcase deep sea giants. From huge arctic walruses to orca and manta rays, the big beasts offer some of the most jawdropping viewing experiences. With this in mind, we’re heading to the Maldives’ beautiful Baa Atoll to uncover some equally awesome diving experiences. This Unesco World Heritage site abounds in spectacular marine wildlife. But the main attractions have to be manta rays and whale sharks.

These gentle giants thrive in these waters due to a strange phenomenon known as cyclone feeding. Between May and October each year the wind, tide and current align at Hanifarun Lagoon. This traps vast quantities of plankton which are irresistible to rays and whale sharks. The feeding frenzy that ensues is one of world diving’s most iconic events. See it for yourself on an unforgettable liveaboard diving trip in Baa Atoll during your holiday to the Maldives.

The beach at Coco Palm Dhuni Kolhu resort in the Maldives is a recognised nesting ground for green sea turtles. Sadly, these popular creatures are on the IUCN Red List of threatened species, and their nests are in desperate need of protection from predators. The resort employs a dedicated marine biologist who is on hand to look after eggs, monitor hatchlings and move exposed nests to safer ground. Hotel guests are invited to join hotel staff in personally releasing baby turtles into the ocean, which cuts the risk of predatory attacks. As David Attenborough tells us in Blue Planet 2, our oceans are currently in their most vulnerable state, so initiatives like this are more crucial than ever.

This is the only Maldivian resort to employ an in-house veterinary surgeon. It is also home to the region’s first turtle rescue centre. Alongside the Olive Ridley Project, the centre works towards releasing entangled turtles. It also provides medical treatments and rehabilitation. Since launching in 2013, the Olive Ridley Project has been dedicated to removing nets discarded in the ocean that continue to threaten the welfare of vulnerable marine animals.

Where to stay: Coco Palm Dhuni Kolhu is a luxury retreat replete with classic Maldivian touches. Eclectic fine dining at a host of outdoor beauty spots, a superb spa with Thai and Indo-influenced treatments, and a superb range of watersports and dive programmes allow guests to experience the height of luxury alongside the adventure of marine wildlife spotting.

A Seychellois outpost with an important history as a wildlife habitat, Bird Island’s former moniker is Ile Aux Vaches due to the numbers of dugongs (sea cows) that once called its waters home. Today these fascinating creatures have all but disappeared, but there’s no shortage of other animal attractions to look out for. Namely birds, as the name suggests, and particularly the sooty tern. A vast colony of around 700,000 pairs nests on the island between May and October.

Bird Island’s Indian Ocean position as the northern-most island of the Seychelles archipelago means it is the first landfall for many migratory Eurasian birds heading south. As such it attracts a range of other feathered residents including fairy terns and common noddies. Since becoming privately owned in 1967, Bird Island has undergone numerous conservation initiatives to protect its wonderful birdlife and hawksbill turtle populations.

Where to stay: Containing little other than a weather station and small landing strip, this 0.94km2 islet located 100 kilometres from Mahe is now a super-exclusive private resort. Accommodation comprises just 26 bungalows, meaning places are limited, so for a more comprehensive selection of luxury resorts in the area visit our Seychelles holidays page.

The small sandy bay of Akumel on Mexico’s Yucatan peninsula lies about 23 miles south of Playa del Carmen. Its blue-green shallow waters may not be deep enough to pique the interest of Mr Attenborough’s Blue Planet 2 team, but for amateur divers and snorkelers there aren’t many better places in the Caribbean to swim with turtles. Sea turtles are abundant here and the waters are protected by a reef. This prevents big waves inundating the bay, so even novice snorkelers can expect to get up close and personal with the turtles.

Our top tip is to arrive early at Akumel, as the fine sand gets churned up easily by other divers, and visibility can suffer as a result. We also recommend making the most of Akumel’s beautiful beach after your snorkelling session. Sunbathe, stroll along the surf and stop by the casual beach-shack bars to grab a taco and a margarita. Perfect.

Where to stay: A little further down the Riviera Maya coastline discover a new, luxury all-inclusive resort with a much-talked-about adults only concept: Unico 20° 87°. Spa treatments, excellent 24/7 room service and celebrity-chef fine dining are all included, and the romantic swim out rooms are highly recommended. The overall vibe marries Mayan heritage with cutting-edge contemporary design to striking effect. 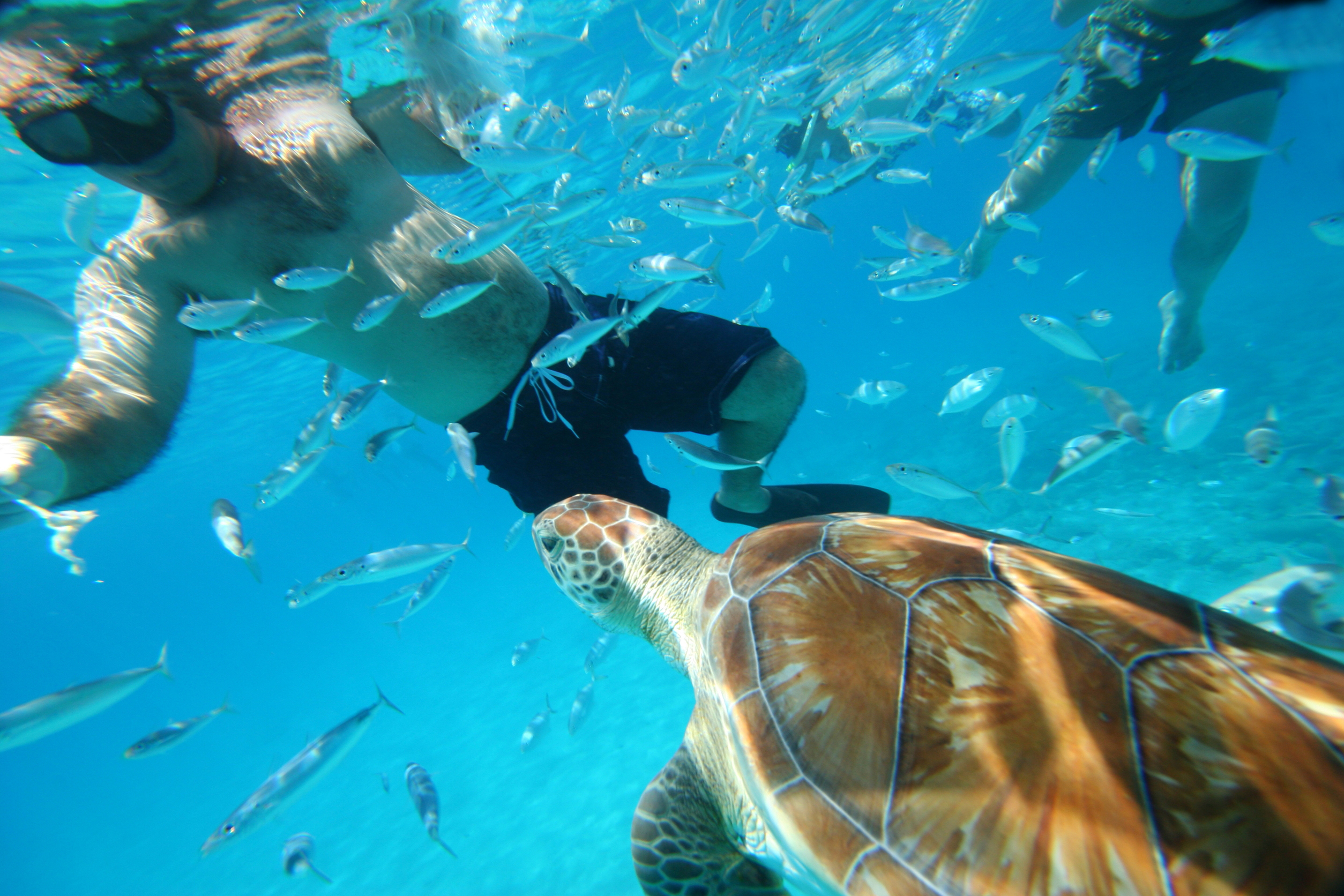