As 007 returns to Jamaica for the 25th instalment of the Bond franchise – No Time to Die – we take a look at the many reasons the island is the James Bond mecca, as the birthplace and inspiration for Ian Fleming’s books and later, as an exotic film-set for the thrilling movies that brought the spy to life. From Fleming’s Goldeneye villa and hotels featured in the films to the rushing beauty of the island’s waterfalls and beaches, here’s a round-up of the top spots for a glamorous adventure around Jamaica – the James Bond way.

Jamaica is the spiritual home of James Bond. In fact, without Jamaica there would be no James Bond – take it from the books’ author Ian Fleming who said that without his long sojourns on the Caribbean island, the stories would never have been written. The island was Fleming’s muse, providing the exotic backdrop for many of his thrilling plots and, later, a living film-set for several of the blockbuster movies including the first-ever Bond film "Dr No", followed by "Live and Let Die", and the soon-to-be-released "No Time to Die".

As a result, the island has become something of a James Bond mecca with countless real-life movie locations around the capital Kingston and beauty spots along the north coast open to visitors. From colonial-era hotels and bond villain lairs to stunning natural waterfalls and beaches, these are the places to visit in Jamaica that recreate the glamour and adventure of the original 007 movies. 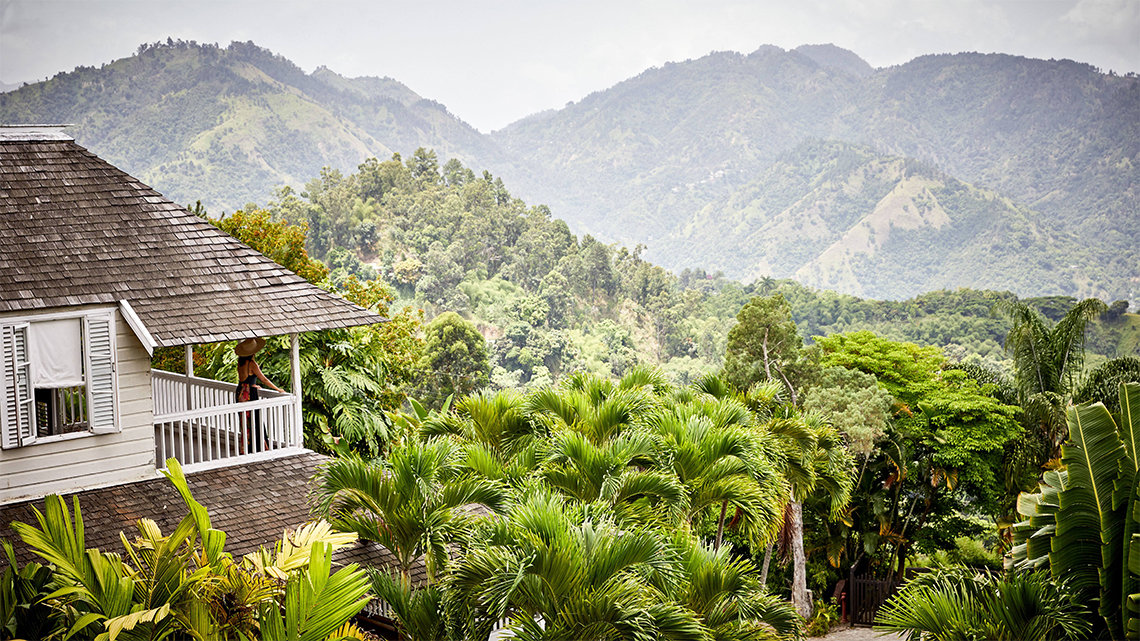 As the place where it all started, Bond fans visiting Jamaica often make the pilgrimage to Ian Fleming’s villa in Oracabessa, 10 miles east of tourist hub Ocho Rios on Jamaica’s north coast. He found inspiration on the island and wrote all 14 of the James Bond novels in his beach-side villa, which he named "Goldeneye" in tribute to his war-time mission spying U-boats in the Caribbean. If the name sounds familiar, it is because the moniker was later used as the title for a Bond film starring Pierce Brosnan.

Today, Fleming’s 52-acre property has been transformed into a plush boutique hotel as part of Chris Blackwell’s Island Outpost Group, which includes the exclusive Strawberry Hill resort in the Blue Mountains and GeeJam in Portland. Guests can plump for an authentic stay at Fleming’s personally-designed villa, book a swanky suite, or rent one of the toes-in-the-sand bungalows spilling onto the idyllic beach. 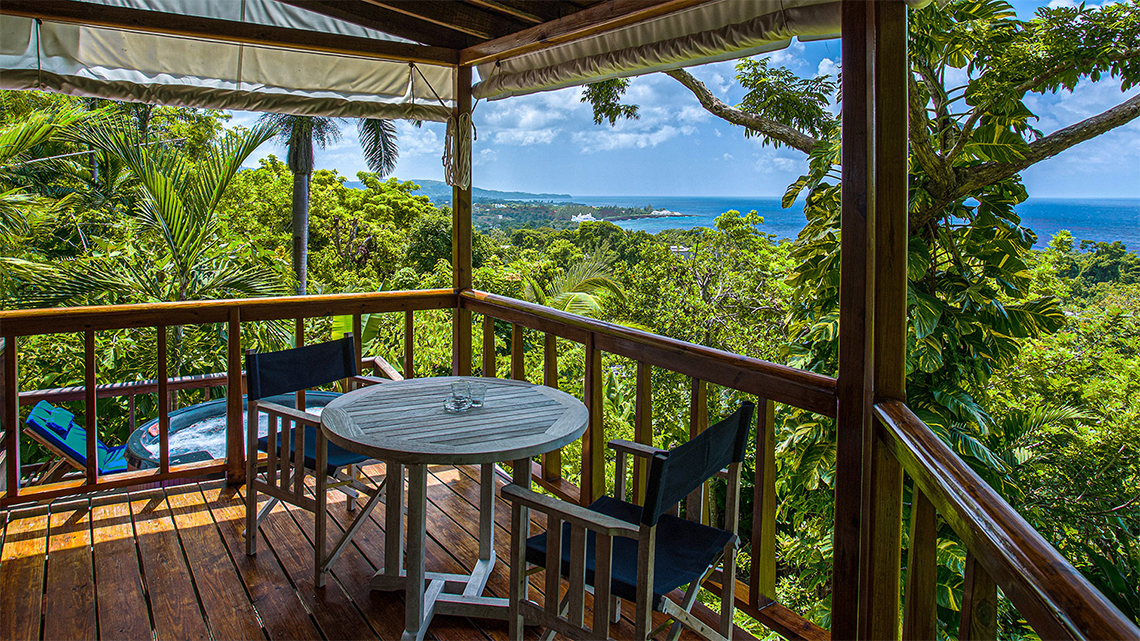 Not only was Bond created here, but the first ever 007 movie "Dr No" was shot a few miles away in and around Ocho Rios, along the very shores that gave the book life.

The island’s natural beauty was showcased in the films and none more so than in the first – Dr No – where the iconic scene of 60s sex symbol Ursula Andress emerging from the surf at Laughing Waters beach clutching two queen conch shells started a visual love affair with the island, set to be reignited by the most recent film. 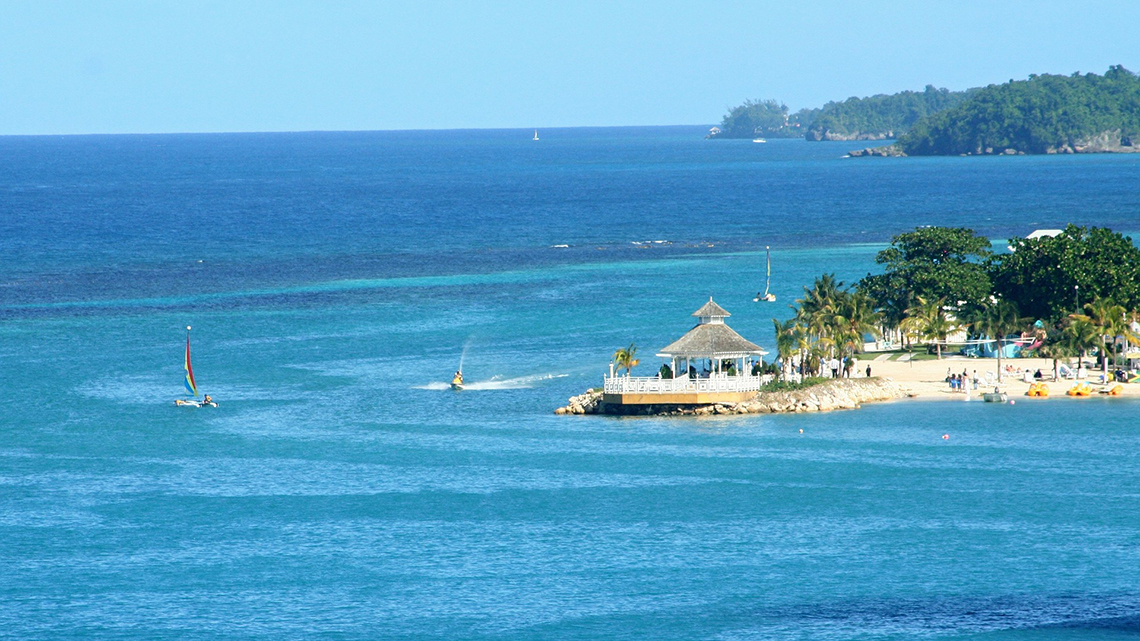 Bond, played by a young Sean Connery, sees Andress’ character Honey Ryder collecting shells and singing "Under the Mango Tree" at the fictional "Crab Cay". The gorgeous palm-tufted coast and bubbling freshwater falls can be seen in the background and have changed little since the 1960s. Another similar location Dunns’ River Falls is just east of here, where James and Honey bathe in the waterfalls, which has since become a major tourist attraction.

The soft cascades descend in tiers through the jungle, emerging at the beach. Travellers wanting to hone their secret agent stealth in paradise can pay to climb the falls to a shallow pool at the top of the hill. It is a truly exhilarating natural experience that can be completed alone or by a guided group holding hands. Of course, the best way is to arrive early when there is not a cruise ship docked in Ocho Rios port, to have the beach and jungle virtually to yourself.

After a long day luxuriating in the region’s natural beauty, nearby James Bond Beach and its Moonraker Bar is an apt spot to enjoy a cocktail, or try a more sophisticated tipple at Jamaica Inn’s lounge bar, the place where Ian Fleming first requested his spy’s special “shaken not stirred” martinis. 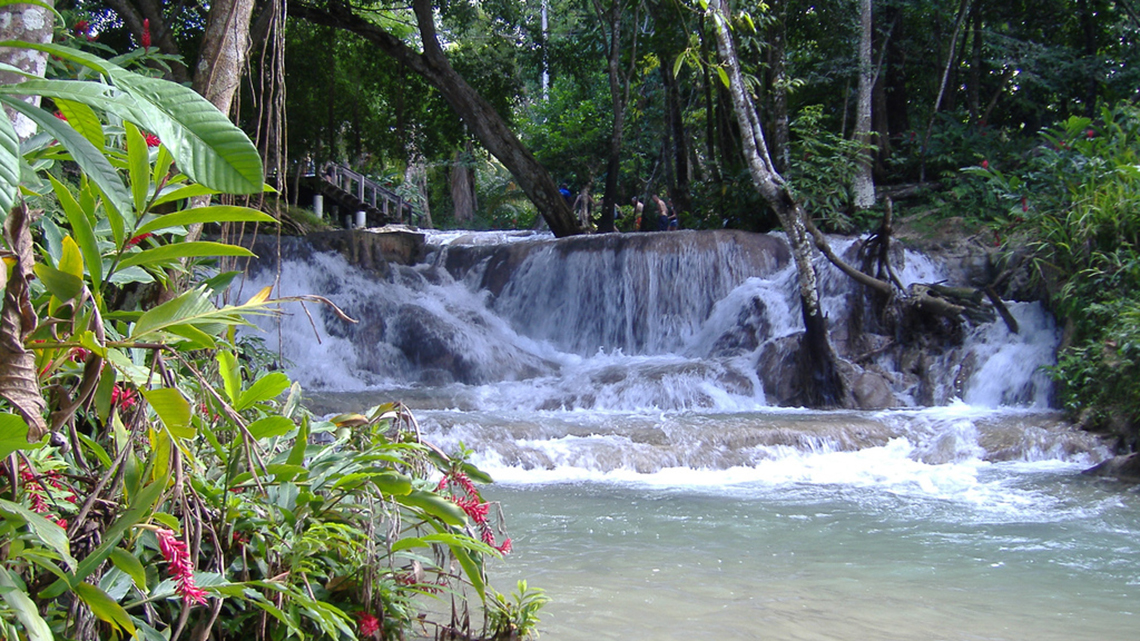 A little further east, the unspoilt parish of Portland doubles as Bond’s hideaway in the new film. The coastline here is indented with some of Jamaica’s most picture-perfect beaches including Rasta-style Winnifred Beach and Frenchman’s Cove, which has all the glamour of a Bond Caribbean beach – all turquoise water and powdery sand framed by jungle-entangled cliffs. During filming "No Time to Die", Daniel Craig stayed at the GeeJam resort close by.

In the story, Daniel Craig’s Bond has retired to Coco Walk Bay, next to Frenchman’s Cove, which can be visited on a land tour or, preferably, by boat. One great Bond-esque way to see Portland is out on the water. Knowledgeable local boatmen at the Blue Lagoon are only too happy to give tourists a whirlwind speedboat tour, and it is undoubtedly the most scenic and thrilling way to see this stunningly beautiful stretch of tropical shore.

Portland’s principal town Port Antonio also became a film set for the new movie featuring a classic action-packed Bond chase scene. Port Antonio’s Spanish colonial facades made it the ideal set-double for Cuba where the chase is supposed to happen during the film. The town is a great place to stop for lunch – follow in the footsteps of Daniel Craig’s Bond down the main street and take the opportunity to stop in at Piggy’s Jerk Centre. Said to offer the most delicious mouth-watering jerk chicken on the island, we can personally attest to its yumminess. And Daniel Craig was so taken with the place that he recently helped raise money to rebuild it after a fire. 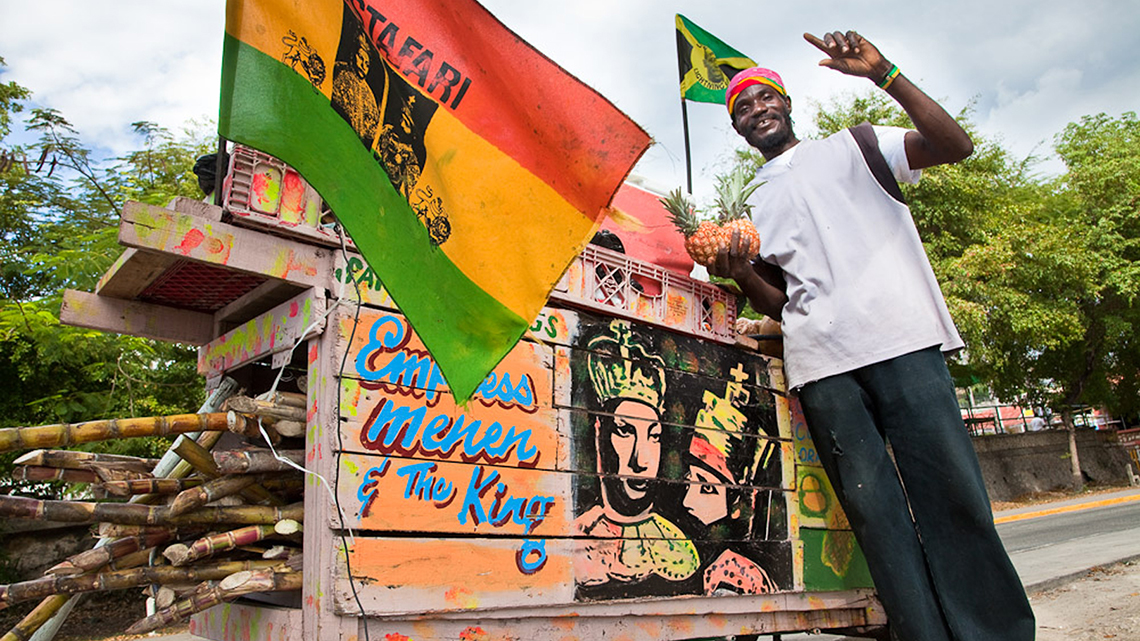 In previous movies, the island’s eerier spots have been used too. Scattered across the north of the island between Ocho Rios and Montego Bay, a few of them could be combined in a thrilling day of sightseeing. First there is the Green Grotto Caves in Runaway Bay, not far from Dunn’s River and Ocho Rios, where visitors can descend into the cavernous underworld of Bond villain Mr Kananga, 007’s charismatic nemesis in "Live and Let Die".

But best of all is Mr Kananga’s Crocodile Farm, perhaps one of Jamaica’s most Bond-like spots. Fans of the films will remember Roger Moore‘s 007 being ushered onto an island surrounded by a swamp of crocodiles in "Live and Let Die", where Jamaica served as the spooky fictional island of "San Monique". Actually, a real place, the Jamaica Swamp Safari Village near Falmouth is little-changed since the movie was filmed there decades ago. It embraced its status as part of Bond history by offering Bond-themed tours, preserving Kananga’s House and lab, and the entrance still features the sign “trespassers will be eaten” from the original film. 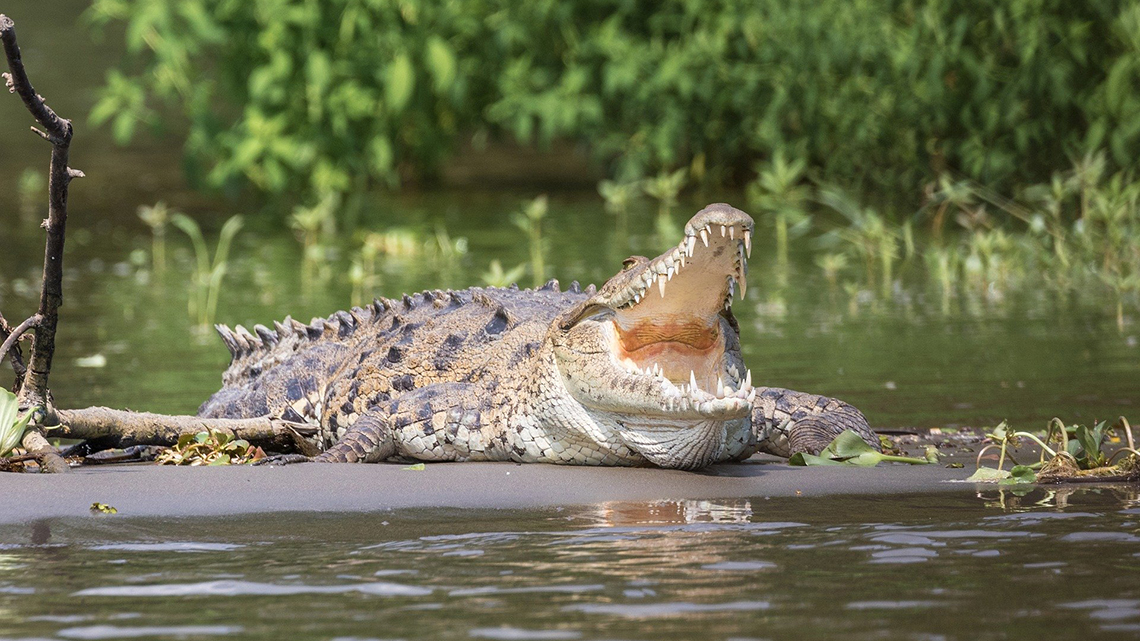 Close to Montego Bay is Rose Hall Great House, which also featured in several scenes in "Live and Let Die". Spooky graveyard shots, action chases and romantic scenes were all filmed around the grounds, which is well worth visiting if only to see the secret waterfall hidden next to the golf course and traditional 18th-century Caribbean plantation house. 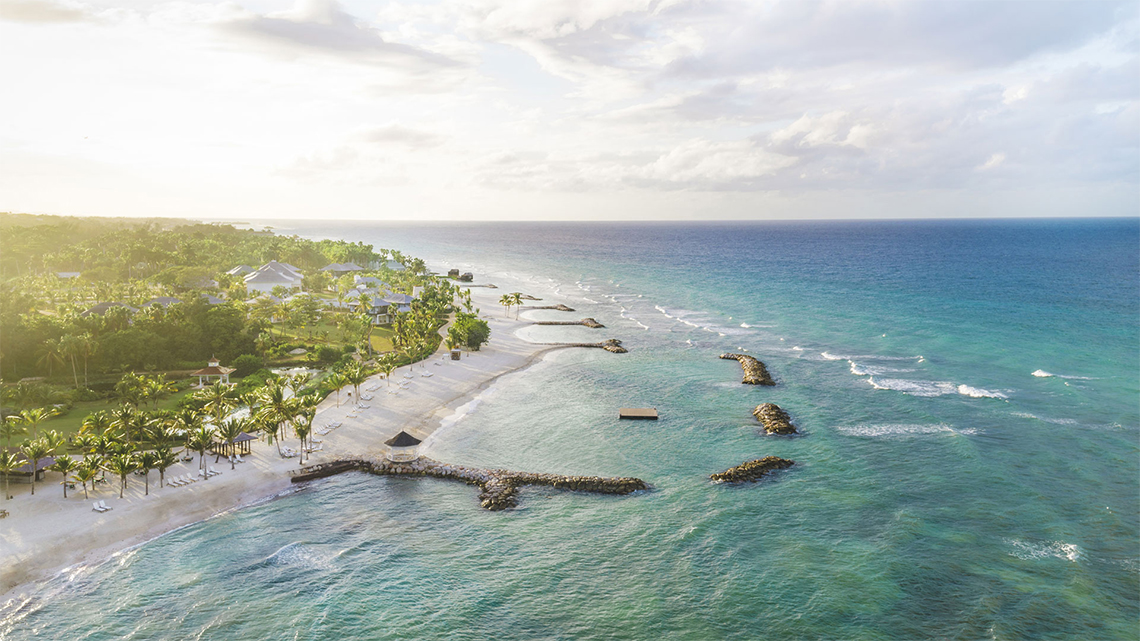 Aside from Goldeneye, Jamaica has a few more notable hotels linked to the spy franchise that are perfect for a Bond-themed break. For a thrilling sense of authenticity, you can even stay in Cottage 10, the very same room at the Half Moon Resort in Montego Bay where Roger Moore’s Bond spends the night in "Live and Let Die". The colonial-style resort looks straight out of Ian Fleming’s era, all old-world glamour and laid-back beach chic, and today features a James Bond experience package for those who want the special secret agent treatment. 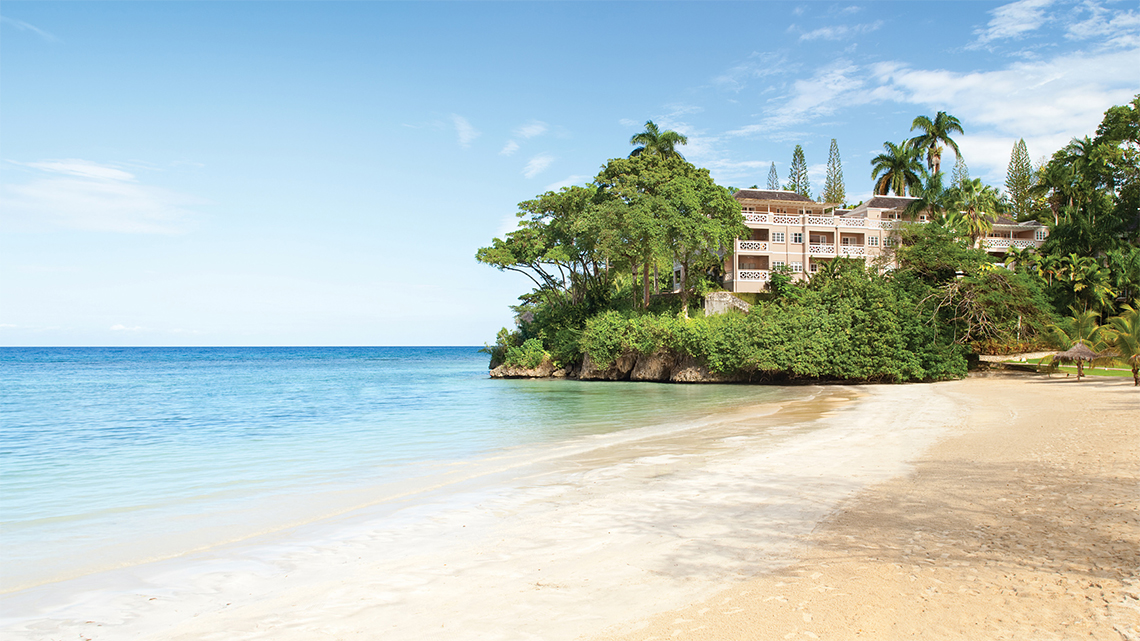 With a dash of movie magic, the Half Moon Resort is combined with the Couples Sans Souci resort in the movie, with scenes shot at both hotels. In reality, Couples Sans Souci is some distance away in Ocho Rios where today you can still stay in the Roger Moore Suite – the actor’s room while he was on location. For fans of "Live and Let Die", the resort still looks strangely familiar with the main entrance, lobby, gift shop, beach and terrace all playing backdrops in the film.

Portland has its new little airport for private flights named after Bond author Ian Fleming, but otherwise access to this unspoilt part of Jamaica is via road from Ocho Rios or Kingston. Ocho Rios is the nearest tourist hub and makes a good base for a James Bond style holiday, though Montego Bay is also a sensible starting point for a tour taking in the Bond sights across the north of the island.

Travellers can also choose to touch down in the Jamaican capital Kingston, just as Sean Connery’s 007 did in the first ever Bond movie. Norman Manley Airport (KIN) is surprisingly unchanged since "Dr No", and the snaking causeway that links it to Kingston will be familiar to visitors from the film’s first car chase.

The Jamaica Tourist Board is set to offer a tour of "No Time to Die" filming locations after the movie’s release on 12 November 2020. For more details or to book a holiday, our Caribbean experts at Kenwood Travel will be only too happy to help. Simply call 020 7749 9245 to speak to a travel consultant.