It’s true. LEGOLAND is coming to Dubai as part of Dubai Parks and Resorts, and it’s opening this week. Dubai’s steady transformation to a family friendly wonderland has grown the city into a serious competitor with Orlando’s big players. So come step into a word that features 60 million LEGO bricks, more than 40 rides, shows and attractions, 15,000 models, a huge amount of skill and a lot of anticipation. Here are the seven ‘blocks’ of LEGOLAND that will change Dubai forever.

LEGOLAND Dubai forms one of the amazing areas that make up Dubai Parks and Resorts.

Welcome to the Factory! LEGOLAND® Dubai FACTORY is where the entertainment truly begins for families on a Dubai Parks and Resorts holiday. Pick up your sunglasses and sunscreen, rent a stroller or get your teeth into a spot of breakfast. Once you begin your tour at the LEGO® Factory, you’ll experience how each LEGO® brick is made, and you’ll receive your very own brick fresh from the casting as a unique souvenir. Or if you want to go larger, check out the BIG Shop, featuring the largest selection of LEGO® in the Middle East. Some people come home with fridge magnets, but those who visit LEGOLAND can take back a castle. Or a pirate ship. Or a city. The list goes on.

Like the other upcoming Dubai Parks and Resorts, LEGOLAND® encourages creation, imagination and innovation. And no matter your age, they take that seriously. At LEGOLAND Dubai Water Park, you can’t simply grab a foam to whoosh down the exciting rides. Instead, you gotta build your own boat. Man the decks, arm the canons and make sure it doesn’t sink. Throw in over 15 waterslides, a LEGO® Wave Pool, plus a DUPLO® toddler play area, and LEGOLAND water park will be a unique, fun and unforgettable experience for kids of all ages.

The pharaoh’s stolen treasure is missing, and it’s up to you to recover it! Dive underwater on a submarine, explore the lost kingdom of ancient temples, charter a wave racer and beat the clock or work up the courage to attempt the beetle bounce. But whatever you do, make sure to watch your back when exploring the Secret Chamber of Amset-Ra. LEGOLAND Adventure embraces the magic we all felt building the same temple sets as a kid. This is one to remember on any visit to Dubai Parks and Resorts. 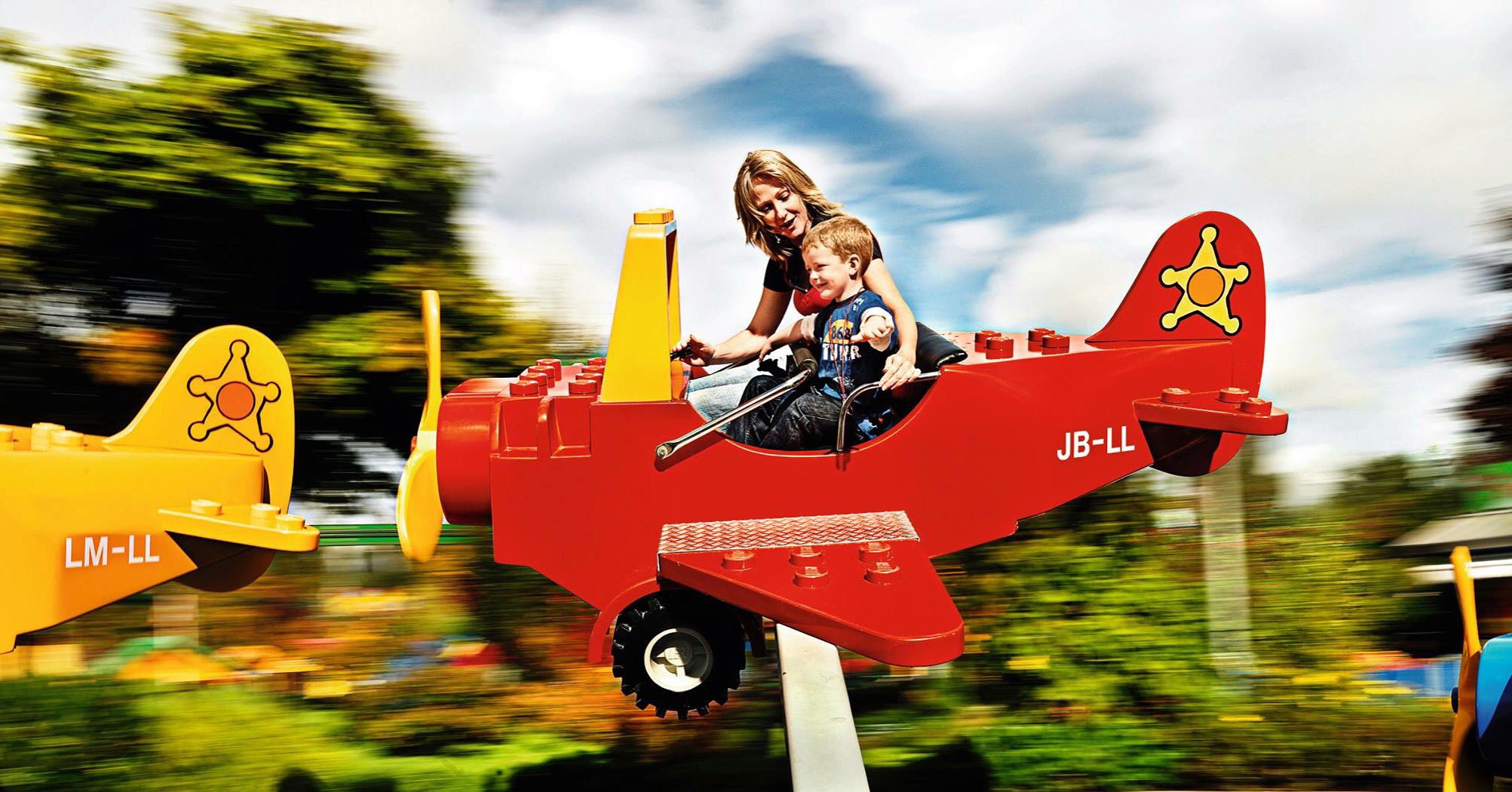 High-flying families will have the time of their lives on a Dubai Parks and Resorts holiday to LEGOLAND.

Imagination is what Lego is all about. Build and race LEGO cars, or book a MINDSTORMS® robotics building class. Step it up a notch with LEGO® TECHNIC Twister and face off with the spinning forces beyond. There’s a DUPLO® Playground too, so the younger kids can keep themselves entertained for hours. Once you’ve finished creating something amazing, conquer the Kid Power Tower and get a view of the entire park. It’s not a view that should be missed.

Miniland  is what LEGOLAND is famous for. If you’ve ever been to LEGOLAND Windsor, you’ll definitely remember the miniature Big Ben or St Paul’s Cathedral; a (mini) tribute to the UK in Lego form, complete with its most famous attractions. Well now you’ve got a Middle East twist, with 20 million bricks worth of world record breaking models including the Burj Khalifa, the tallest Lego miniature model ever featured. Miniland in LEGOLAND Dubai is set within an air conditioned interactive area and includes Build a City, a ten metre play table. There’s no better way to witness some of the world’s biggest miniature attractions.

The centerpiece of LEGOLAND is in need of a hero. Mingle with knights, jesters and princesses, then defeat the dragon on a roller coaster that takes you through Lego’s famous medieval sets and designs. Embark on a battle of wits at Merlin’s Challenge, and break his spell by pedaling up and down with Merlin’s Flying Machines. Meanwhile, the younger ones can learn the ways of magic on the Dragon’s Apprentice – there’s something for everybody in LEGO Kingdoms.

Earn an official LEGOLAND® Driving License at Driving school after learning how to drive an electric car, or join the crew of The Shipyard and put your skills to good use. Lego City sees you use your talents to fly planes, steer boats or even save a ‘burning building,’ in this amazing little LEGO city®. With all this excitement, you might not need to see the rest of Dubai at all!

More on Dubai Parks and Resorts

Dubai Parks and Resorts will provide a world of fun for all. LEGOLAND® Dubai opens on 31 October 2016 with more exciting parks to follow.  Check out our Dubai holiday special offers here to experience the magic of LEGOLAND for yourself.