Have you seen the Serenity movie yet? It’s a new island thriller taking film fans by storm. Despite the drama unfolding into somewhat of a nightmare for its characters (spoiler alert!), the movie’s location is absolutely dreamy. So everyone’s trying to guess where it was filmed. If you’re one of the movie buffs pondering just that, look no further. Kenwood Travel’s Indian Ocean specialists are here to reveal Serenity’s blockbuster setting, and its credentials as a holiday hideaway.

As a tropical noir thriller starring Hollywood heavyweights Matthew McConaughey and Anne Hathaway, the Serenity movie demanded an equally blockbusting location. Step forward beachy haven Mauritius in the Indian Ocean, doubling as the make-believe island of ‘Plymouth’. Although the film depicts a fictional world set in the middle of nowhere, and much of the action takes place in a small harbour specifically built for the shoot, Serenity’s breath-taking backdrops and cinematic vistas are unmistakably, authentically Mauritian.

To mark the release of the Serenity movie in the UK, and to recognise the importance of its location not only as an enchanting holiday destination but also as an emerging shooting location for international film productions, Kenwood Travel is proud to partner the Mauritius Tourism Authority.

Rhys Powell, Sales and Marketing Senior Account Director, Mauritius Tourism Promotion Authority, commented: “Movies have been known to increase tourism to the destination and this is why we chose to partner with Kenwood Travel. We will be working with them to promote holidays to Mauritius in the coming weeks.”

“Mauritius is one of the world’s most beautiful islands and is a very important partner to Kenwood Travel. We have a strong relationship with the Tourist Board and many of the key hotel partners including the Beachcomber group. In keeping with our quest to be experts in the region, we sent 20 of our team to experience it for themselves in December 2018,” said Dipshaa Patel, Kenwood Travel Commercial Director.

“At Kenwood Travel we pride ourselves on being travel experts. It is why we went behind the scenes to understand the film locations and decided to bring it to life through a map (see below – Ed). The map aims to highlight some of the areas in the movie plus bring to attention some of the key places to visit. Movies can boost tourism to a destination irrespective of the script and plot. This is why we chose to support the Mauritius Tourism Promotional Authority,” added Jean-Marc Flambert, Head of Marketing at Kenwood Travel.

Visit us online and subscribe to our newsletter for regular Mauritius news and exclusive travel deals, direct to your in-box. Or, if you just can’t wait, and want to experience the dramatic cliffs, sugarcane fields and serene beaches depicted in the film for yourself, call our Indian Ocean experts on 020 7749 9241 and book your Mauritius escape today. 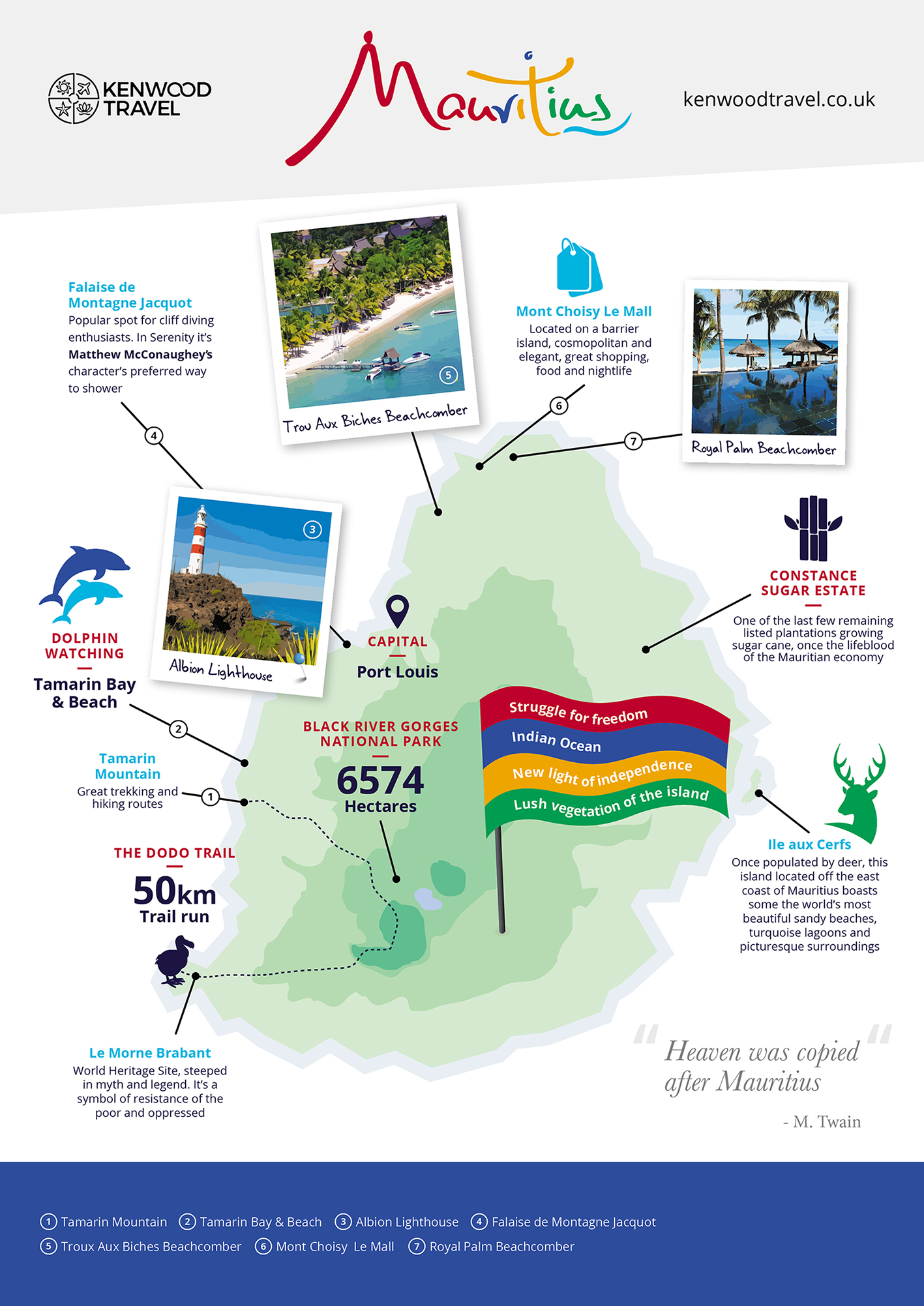 1. The harbour featured in Serenity was built especially for the film in the northern town of Trou aux Biches. The houses were painted bright colours to give the town a distinct look.
2. The Serenity cast were lucky enough to be accommodated at the Trou aux Biches Beachcomber Golf Resort & Spa during the shoot.
3. The hotel featured in the movie is the Royal Palm Beachcomber.
4. As a former British colony, English is widely spoken in Mauritius.
5. The flightless Dodo was native to Mauritius. Sadly, it’s now extinct of course, but there are still 28 other endemic bird species waiting for you.
6. Legendary author Mark Twain was an early adopter of Mauritius’s charms. “Mauritius was made first and then heaven; and heaven was copied after Mauritius,” he said.