Risqué humour, animal attraction, ironic parody. Often cloaked in metaphor and masquerade, the themes that underscore the music and dance of Caribbean carnivals are proud and profound but ultimately tongue in cheek in the face of deeper struggles.

A way to celebrate freedom from the shackles of slavery in the wake of abolition in 1833, carnivals in the Caribbean became highlights of the local calendar where social solidarity and party spirits could flourish. It was a case of small islands making a big noise and with migration to the UK from the English-speaking islands widespread by the 1950s, it’s small wonder that the new British residents would seek to continue their annual musical pageantry. Hence, in 1964, we see the inaugural Notting Hill Carnival taking to the streets of W11. Britain’s a small island too, after all.

Cue elliptical stylus scratching the turntable and fast-forward to today. 2013’s Notting Hill Carnival attendance was in the region of one million. It is the biggest street party in Europe. Stars like Rita Ora et al flock to the August bank holiday hotspot knowing there’s a legitimacy and status attached to such a fun-loving yet discerning crowd.

It’s relatively easy, here in Britain, to attend Notting Hill Carnival and join in the fun. And you’d be forgiven for thinking it is the carnival – the one and only – the culmination of all its precedents, because in a way you’d be right. But in absorbing a broad idea of Caribbean carnival influences, merging with Western considerations in music and catering to such an enormous audience, can the behemoth of Notting Hill Carnival save room for the voices of the smaller, quieter Caribbean Islands? Don’t we owe it to ourselves to visit the Anguillas, Dominicas and Bequias of the world and experience the original carnivals first hand? 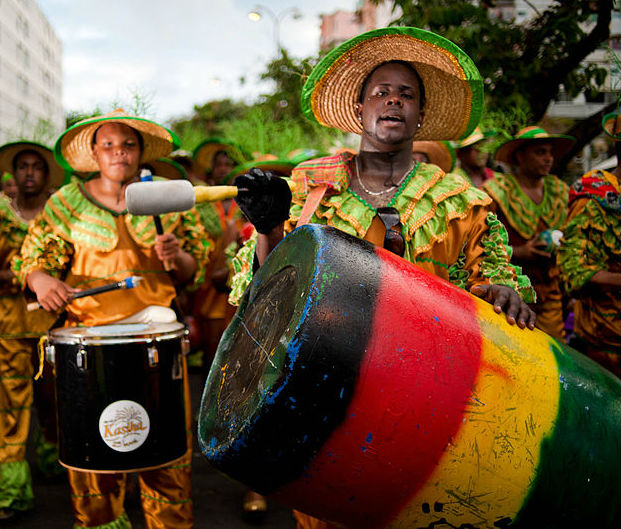 We’re drumming, drumming… And I hope you like drumming too

Music is the beating heart of any Caribbean carnival. The melodic foundation of steel pan music (Trinidadians are recorded as early as the 11th century beating bamboo in a style that would evolve into modern Pan music), via calypso and soca, would give rise to reggae and dub with eventual permeations in R&B, house, drum & bass and hip hop – staples of any DJ set and of vital importance to the fabric and evolution of popular music worldwide. Barbadian global megastar Rhianna is a notable beneficiary of this musical umbrella but a closer look at the smaller islands reveals its hardcore practitioners.

One of the Caribbean’s most critically acclaimed musicians is Bankie Banx. Hailing from Anguilla, he has become an icon of reggae and encouraged focus and attention to fall on his native island with the opening of his famous Dune Preserve Music Bar. The island also plays host to the Moonsplash Annual Music festival and the Tranquillity Jazz festival but it is the carnival each August that sets its pulse racing. This celebration of life and music incorporates calypso contests, street dances, boat races, costume parades, stilt-walking and beachside barbeques.

Bequia Carnival, meanwhile, kicks off its informal blend of joyful spontaneity and vibrant street parades each June. It’s a ‘true small island carnival’ and an essential event in the cultural agenda.

Just a snapshot, then, of three little islands’ Caribbean carnivals, but a good idea of what you can expect throughout the whole archipelago. Perhaps what stands out most about these celebrations is the inclusivity. Travellers are encouraged to embrace – and be embraced by – the unique sense of one-love unity. It’s not all about West London when it comes to authentic carnival flavour. For a real taste, surely, you’ve got to go where it all began. These small islands created carnivals that became a byword for togetherness, communal harmony and defiance in the face of repression. And with each one being in such a stunning tropical-holiday destination, paying them a visit is rapidly climbing to the top of that bucket list. Tempted? There are always great holiday deals to The Caribbean at Kenwood Travel.