Caribbean island life is a wonderful thing. It’s just that bit more easygoing than anything us Brits are used to. The rat race, the nine-to-five, rush hour. Routines like these take a back seat round these parts.

Antigua’s unhurried pace means there’s always time for a carefree afternoon drink. And on an island famous for its 365 exquisite beaches, where better to enjoy this drink than on a beach-bar crawl? We couldn’t resist the idea. And nor, it seemed, could the island’s feathered friends. At Turners Bar – stop number four on our trail of the best beach bars in Antigua – we noticed a small yellow bird perched upside down on the bar optics, drinking from one of the bottles. A quick googling among the twitchers in our number revealed the bird to be a bananaquit. The booze it was drinking? Banana liquor. Go figure.

Turners Bar is tun up*

Turners Bar is the last watering hole along the beach on Antigua’s Picarts Bay heading south, and its mellow vibe is echoed in its no-fuss décor. It’s a simple, open-sided wooden decking area raised off the beach, where locals gather to sit in the shade enjoying cold beers and grilled steaks.

Our tour of the best beach bars in Antigua had begun earlier with lunch at Dennis Cocktail Beach Bar & Restaurant. This famous diner is perched on a hill overlooking the white sands and blue waters of Ffryes Beach. Live music greets the lunch crowd who come for local specialities like curried goat, garlic shrimp and red snapper, all hosted by chef Dennis Thomas himself. I ordered the fish and fries; beer-battered tilapia served with chips and Dennis’ ‘secret’ coleslaw. The tender fillet and unusual sweetness of the crisp batter made this a real meal to remember. Not yet brave enough to commit to cocktail hour, I accompanied my lunch with the local beer, Wadadli, for an authentic taste of the Caribbean. Resistance to cocktail hour would prove futile however…

When your ice-cold cocktail is brought to you on the beach as you emerge from the water after a refreshing swim, 32-degree heat becomes all the more manageable. That’s exactly what happened at the iconically named Jacqui O’s, the next stop on our tour of the best beach bars in Antigua. Now, although Jacqui Onassis did, in 1964, frequent the beach on which this bar now stands, its name actually derives from the previous owner, a certain Mrs Jacqui O’Riley.

Let that take nothing away from the high-life allure of the place though; it still shimmers with an unmistakeable jet-set glamour that feels at once exclusive and welcoming. It’s primarily a cocktail and seafood joint, but there’s no menu as such. Instead, just describe what you’re in the mood for and the smiley waiters will make it happen. Meanwhile, owner Lance DJs an eclectic selection of chilled-out tunes and clubland remixes.

The music took on a more Balearic ambience at the next bar we called in at. Rum Bus Beach is a London route master bus turned cool-crowd hang-out. It’s reassuringly loud and lively and, considering the fact that patrons are encouraged to graffiti the bar and the swimming pool has been fashioned out of an old fishing boat, quirky too. Hire a beachside cabana and get your margarita on in the early evening sun. 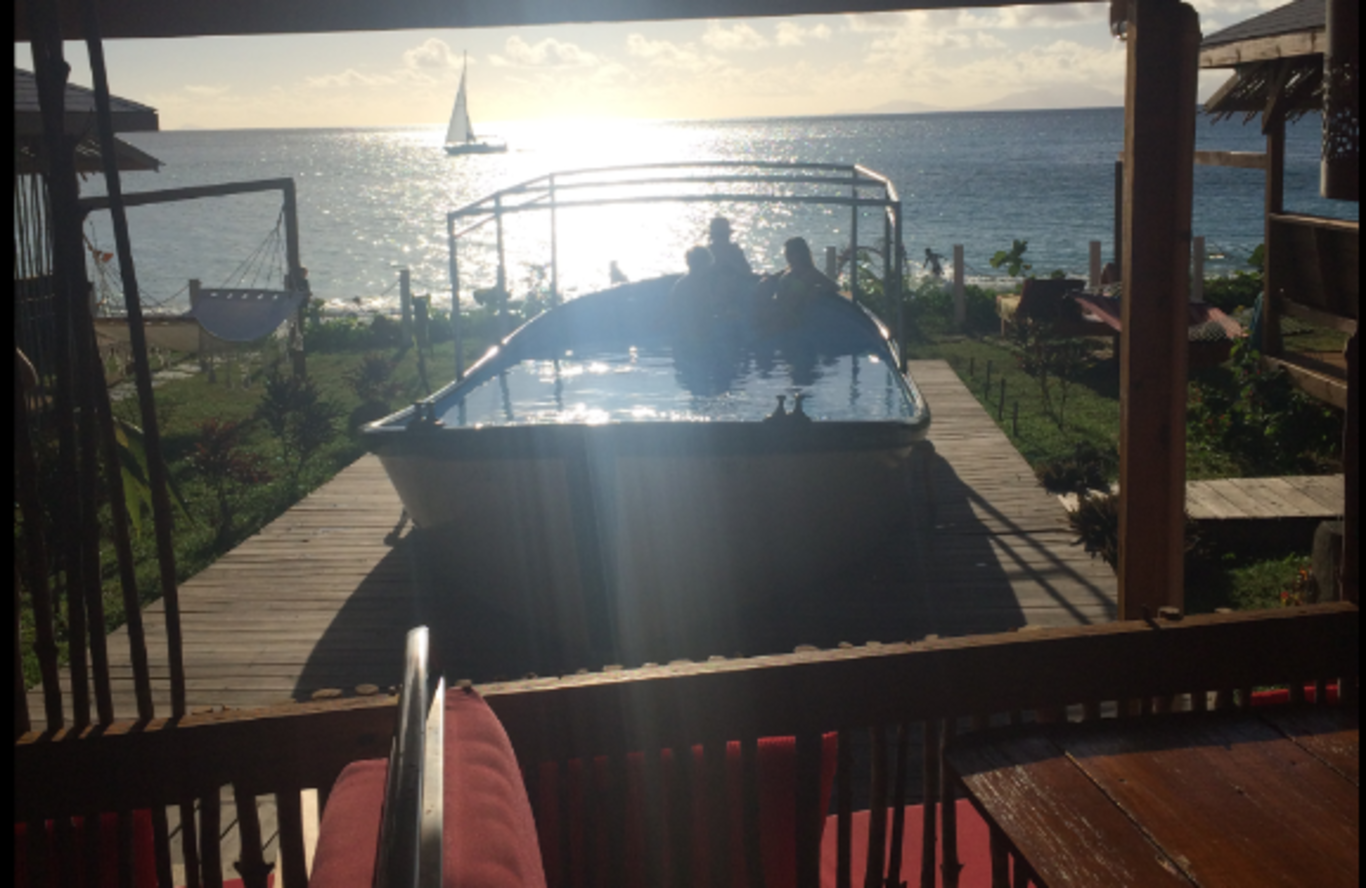 Dive into cocktail hour. The swimming pool at Rum Bus Beach bar has been refashioned from an old fishing boat.

From the vantage point of Cobbs Cross en route to Shirley Heights we noticed a cruise ship in port at English Harbour. Although not on the beach, Shirley Heights Lookout constituted the last stop on our Sunday bar crawl of Antigua’s beaches, and the cruise ship’s presence meant we could expect a good turnout at this famous venue. Sunday nights at Shirley Heights in Antigua are a fiesta of eating, dancing and merrymaking which goes on long into the evening. But arrive in good time if you want a good spot from which to watch the sun set over English Harbour.

For locals and those on holiday in Antigua, it’s a weekly ritual to flock to this historic lookout point where steel pan music and barbecue grill smoke fill the air. The site is an old fort whose elevated position was strategic for the English navy in monitoring trade activity in the waters below (since England’s reclamation of the island from the French in 1667). Indeed, Nelson’s Dockyard (construction began 1740s) in English Harbour is the only remaining naval dockyard in the world.

As the night wore on the gala atmosphere grew and grew. Revellers danced and sang along to the rhythmic soca sounds as the BBQs sizzled and the jerk chicken queues continued to snake through the bustling crowd. 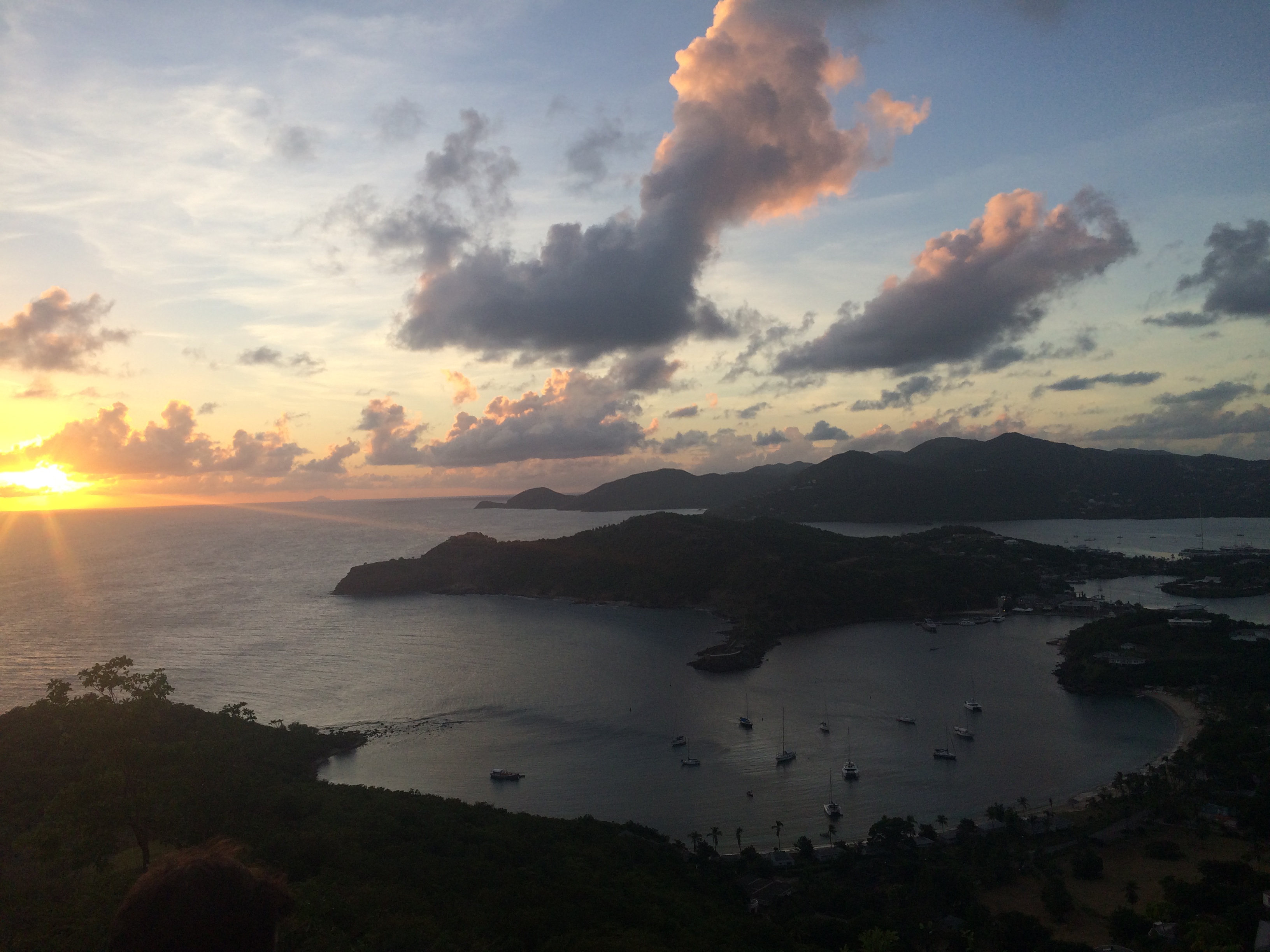 The iconic view of English Harbour from Shirley Heights was the perfect end to our tour of Antigua’s best beach bars.

If these beach bars have got your tastebuds tingling for an Antigua holiday, our destination experts are on hand with some excellent recommendations on where to stay on the island. Speak to our Caribbean team on 020 7749 9245 today and let us bring the art of escape to your getaway.