Think Mauritius and you will probably think of a beautiful, tropical island – and you’d be right! However, there’s a good chance when it comes to the exact weather in Mauritius at any particular time of year, you may not know anything more precise. So let’s colour in this pleasant picture with a few more specifics.

So where is Mauritius? That seems like a logical thing to ask to get an idea of what kind of climate to expect. This charming island nation rises like a gem out of the south-western Indian Ocean, laying about 540 miles east of Madagascar. This positions it within the tropics, a little way to the north of the Tropic of Capricorn, and it’s what ultimately determines the weather in Mauritius. This precise location also means that although it’s is a long haul destination from the UK, the time in Mauritius is not too different from that of the UK – being three hours ahead in summer, four in winter. This means that compared to many popular tropical destinations, jet lag isn’t too much of an issue for those travelling to Mauritius from the British Isles.

The capital of Mauritius, Port Louis sits above the Indian Ocean, and like the rest of the island, enjoys relatively warm and sunny conditions throughout the year. This delightful country basks in consistent heat and is generally fairly dry. This is the weather of Mauritius in a nutshell. Despite the heat, the year-round south-easterly trade winds mean that it rarely feels too unpleasant. Summer in Mauritius runs from December to April, when the island is at its most humid. Winter, slightly more cool and dry, runs from May to November. 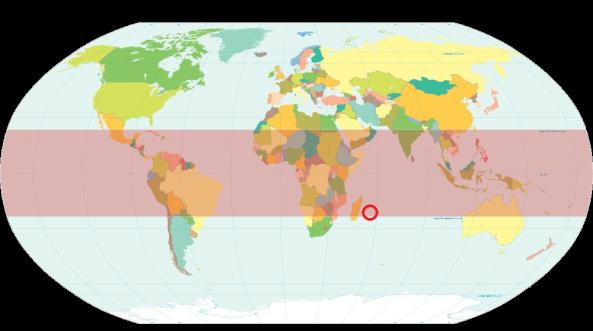 The pale red band shows the intertropical zone, Mauritius is circled in red

The ideal time to visit is probably May to the beginning of December, with January and February probably less attractive for divers and water sports fans; this is cyclone season meaning the ocean can be more choppy. Although Mauritius itself is rarely troubled by cyclones, high winds out at sea can bring less favourable conditions at this time.

Temperatures on the coast stick broadly within the 25-33°C range in the summer months, 18-24°C in the winter. It is slightly cooler, about 5°C or so, further inland with the highlands and more mountainous areas likewise seeing slightly more rain and low cloud than the rest of the island. The windiest time of year is July and August, particularly on the east coast, although the breeze is usually not unpleasant and brings gentle relief from the warm temperatures.

The general consistency of the weather in Mauritius means that there isn’t really a high and low season in these paradise islands. The biggest surge in visitors tends, like many places, to be in August, mainly due to the school holidays taking place at this time of year.