Get out of the way Glastonbury, curb your enthusiasm Coachella, and buck up, Burning Man: this is AfrikaBurn.

This week, the crowds begin to descend on Glastonbury 2013 and the UK festival season begins in earnest, however, last month a certain festival in South Africa known as AfrikaBurn gave the springboks a head start. We look at how the two worlds compare, and how AfrikaBurn scorched a big fiery hole in the global festival circuit.

“What do I need to bring?” poses one FAQ on the AfrikaBurn website.

AfrikaBurn is Burning Man’s cooler, artier, nuttier cousin. If ever extra incentive for a holiday to South Africa were needed, last month 7,000 people descended on this explosive arts festival in the desert to burn: themselves, and some stuff.

“The installations at the Burn are made to be set on fire, and designed specifically for that purpose. This is really the whole point of the festival. You go to the Burn to dress up, have many a random experience, give things away and to set things on fire.” 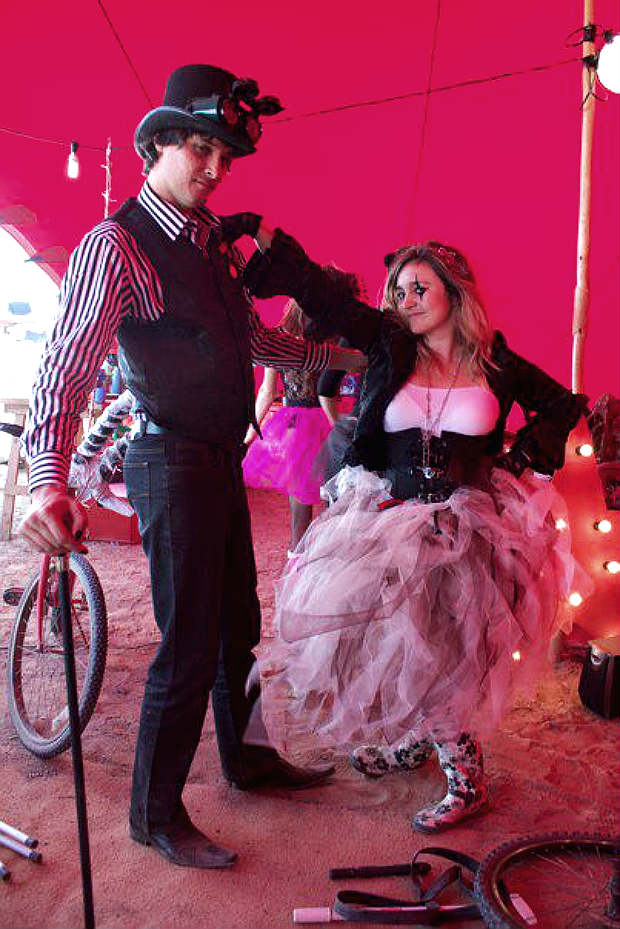 This is Cath, my wonderful and intrepid friend from South Africa, and the girl on the ground down in Tankwa Karoo, Northern Cape Province. With Cath having very much been a festival buddy of mine in the past in the UK, my curiosity (spattered with a pang of jealousy) was at an all-time high upon hearing about a festival in the South African desert, so I asked about her experience of the global event world’s hottest new trailblazer.

“Of all the festivals in South Africa, this was the festival that felt the most similar to UK festivals like Glastonbury, both in regards of creativity and in terms of the type of people,” Cath explains.

“The main difference is that everything is created and organised by the festival goers. No one sponsors the event. It definitely attracts the most creative of South Africa’s citizens which is evident in the costumes and installations.” 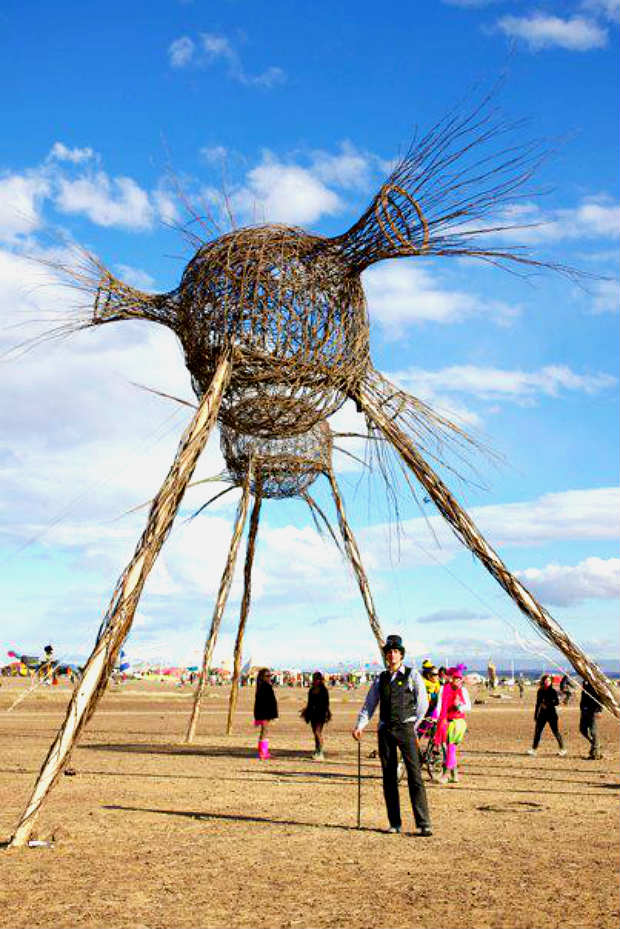 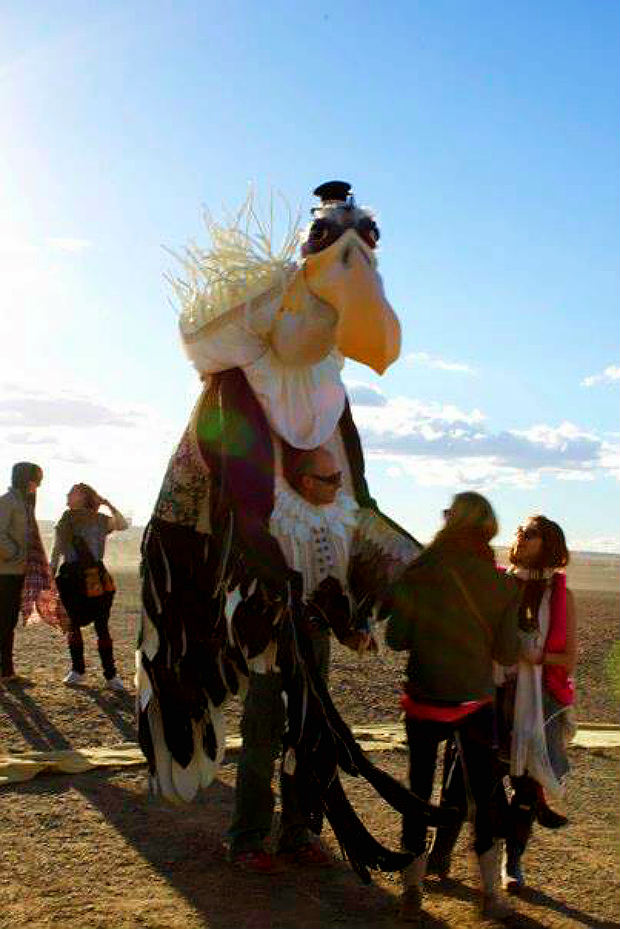 Much like Glastonbury, which is officially known as the Glastonbury Festival For Contemporary Performing Arts, AfrikaBurn is not a music festival per se, despite music playing a pivotal role in the weeklong affair. It is an arts festival, designed to entice the very bravest, the most extravagant and most creative from the woodwork. Perhaps it is for this reason that, unlike most other festivals, AfrikaBurn attracts a noticeably wide age range.

“People of all ages frequent the festival – young children to more senior members.”

Although generally touted as the African Burning Man, the event isn’t actually organised by Burning Man, rather it is a ‘regional’ offshoot of the Nevada behemoth. AfrikaBurn is arranged in a horseshoe shape, and in the inner circle – known as the Binnekring – is where you find the theme camps for audience participation. And AfrikaBurn insists that its audience are participants, not spectators.

“They’re campsites organised specifically for the interaction of festival goers, whether it’s a place to party, jam or play tennis with oversized tennis balls.” 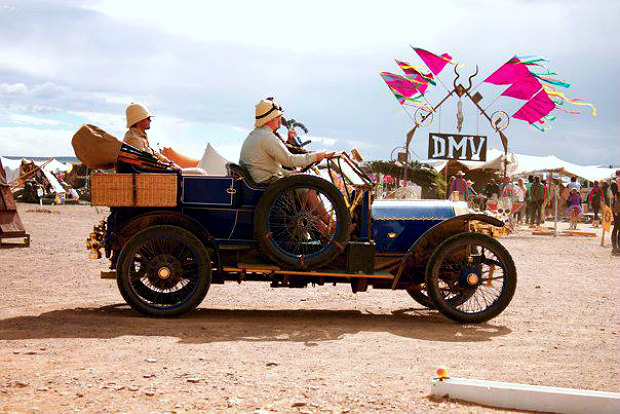 The Burning Man festival in the US is often famed for a liberal approach to consumerism, employing a kind of bartering system. I’d heard stories about this from across the pond, which had always confused me somewhat. I’d imagined at the end of the week when resources began to dwindle that people were swapping their only clean pair of pants for a beer and a burger. I wondered if it was the same deal with AfrikaBurn, but to my surprise the situation isn’t quite as I’d imagined.

“It’s actually not a bartering system at all,” says Cath. “That’s a common misconception. The concept is around gifting. Gifts can come in many forms: a theme camp, an art installation, lollipops, food, drink, and maybe items of dress-up. I gifted a trampoline and sparklers – the burning variety as opposed to the sweets – and received a Polaroid picture, some furry cat ears, French toast, pancakes, tequila sunrises, brownies, G&Ts, gummy-berry juice, smiley-faced badges and cookies from an actual girl scout!”

Nevertheless, it’s true that you cannot purchase anything onsite. Except ice, which is sold at cost price to keep food refrigerated. The fact that it cools down your recently acquired G&T is obviously a bonus. 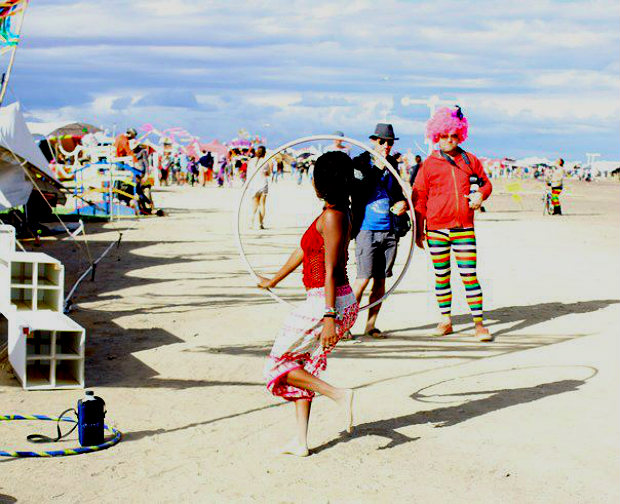 All of this, plus the simple fact that you’re in the middle of the desert, does of course mean you need to be prepared. REALLY prepared. AfrikaBurn’s saving grace over Burning Man is perhaps that it is organised in the South African autumn, and the desert heat never reaches peak levels. That said, it still does get pretty damn hot.

“You have to prepare and take everything, and I mean everything,” says Cath. “Basically you need to be able to survive for five days in the desert. Make sure to bring enough food and water as much as alcohol and costumes. On top of that you have to take your tents, campsite decoration, a generator, lights and light bulbs, stretch tent, duck tape, cable ties, a shower and any other item you wish to gift at the festival, including our three-metre trampoline. This does mean weeks and weeks of preparation and a car that is packed to the brim.

“Not everyone is that organised, however, and you can definitely be less kitted, but it can get hot during the day and freezing at night, so it’s really nice to have a good campsite to come back to.”

Cath says the absolute essentials are at least 25 litres of water, food, fancy dress (yep, essential) and gifts. Plus make sure read the AfrikaBurn website as the tips for first timers pretty much cover it. 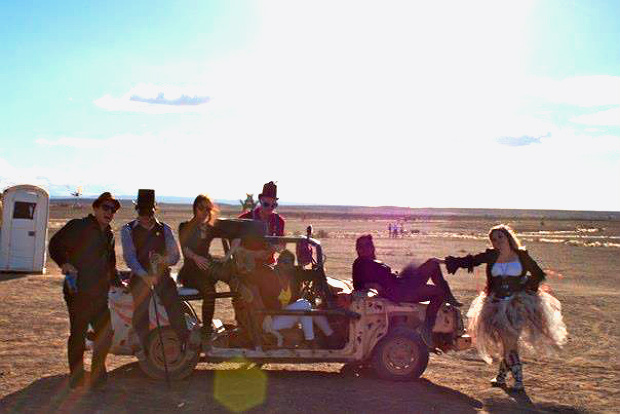 “To be honest, you’ll never be 100% organised the first time you go and you’ll do it completely differently the second time around,” laughs Cath.

And there will be a second time. The experience of AfrikaBurn is something completely unique. Or to put it better, AfrikaBurn is a series of completely unique experiences about something. Because you never know where the path will lead, you never know what stories you’ll create or what kinds of fantasies will be realised. Fantasies you may not even realise existed within yourself. The wonder of festivals like AfrikaBurn is the sheer breadth of weird and wonderful creativity on display. Installations are designed to titillate each and every sense and sensation, and the festivalgoers crave this. Within its macabre posturing it is a celebration of self, of letting go completely, and the feeling is addictive. You will never have moments like this twice:

“I was pretty drunk when I stumbled upon the Soviet Circus tent. Inside I was handed a shot that burnt like tequila, only to turn around and have my palm read. To my utter dismay, I was told that I would have four children. The thought of bearing a child not once but four times filled me with dread and if my clairvoyant hadn’t come in the form of a nine-year-old girl, I might have had strong words with the little critter. But before I had an opportunity to speak my mind I was carted off into the Poetry Brothel where two women blindfolded me, lay me on a bed scattered in rose petals and read me poetry whilst rubbing my body with feathers. They completed my discretion by popping chocolate in my mouth and sending me on my way to change the sheets for their next, er, customer. I was pretty tweaked after that!”

With thanks to our friend Cath Collins for putting herself through such brutish conditions and living to tell the tale. As we prepare ourselves for Glastonbury 2013 and the festival season, we are reminded of our debt to your bravery on the frontline, dedicated to discovering the delightfully nuts.