An iconic resort, located in the heart of the Las Vegas Strip. Planet Hollywood has been described as the centrepiece of Las Vegas, sitting on the Strip’s most popular block. As a guest, you can easily access Paris Las Vegas and the Bellagio. With 2,500 modern and stylish guest rooms and suites, each equipped with one-of-a-kind movie memorabilia, you can rest assured that your stay will be nothing less than a true Las Vegas holiday experience.

Nightlife and Entertainment at Planet Hollywood

What makes Planet Hollywood a stand out on the Las Vegas Strip is its legendary entertainment. With some well-acclaimed musical performances, (past and present) including Britney Spears, Jennifer Lopez, Backstreet Boys, Christina Aguilera, Gwen Stefani, and much more, your source of entertainment will be covered during your holiday to Las Vegas (Be sure to check with your travel expert on who will be performing during your stay). Other performances based at the hotel include the Sin City Comedy & Burlesque show, and the infamous, wild and sexy Crazy Girls. With an array of lounges and bars available at Planet Hollywood, every night is guaranteed to be a lively experience. The open air EXTRA lounge is a hotspot where US TV show Extra hosts come to mingle and interview celebrities. Who knows? You may spot and A-lister or two when sipping on your drink. Cool off from the Nevada sun with some frozen cocktails courtesy of ‘Shiver’ or join in the pool party at The Scene Pool Deck, located on the hotel’s rooftop pool.

With several lounges and 10 restaurants, your dining choices will be endless during your holiday to Las Vegas. For a casual scene be sure to try Gordon Ramsey’s (Kitchen Nightmare and Hell’s Kitchen) burger joint, BurGR, Pin-Up Pizza, Ringers Wings, Pizza & Sliders, The Earl of Sandwich, Yolos Mexican Grill, P.F Changs and the award-winning Spice Market Buffet. For a fine dining experience, visit KOI, a Japanese restaurant that specialises in a California-style-sushi, and the Strip House Steakhouse. Your caffeine cravings will also be taken care of at the Planet Hollywood’s Starbucks.


Please Note: This hotel charges a resort fee of $41.95 including tax, per room per night, and covers the cost of the following facilities: All local calls, Fitness Center admission for 2 people per day and Daily in-room  Internet access for 2 devices. This rate is subject to change, is not included in your holiday price and must be paid locally. 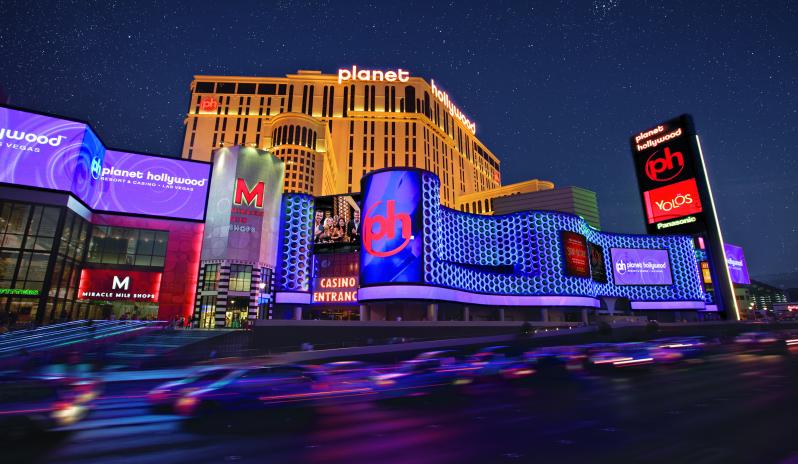 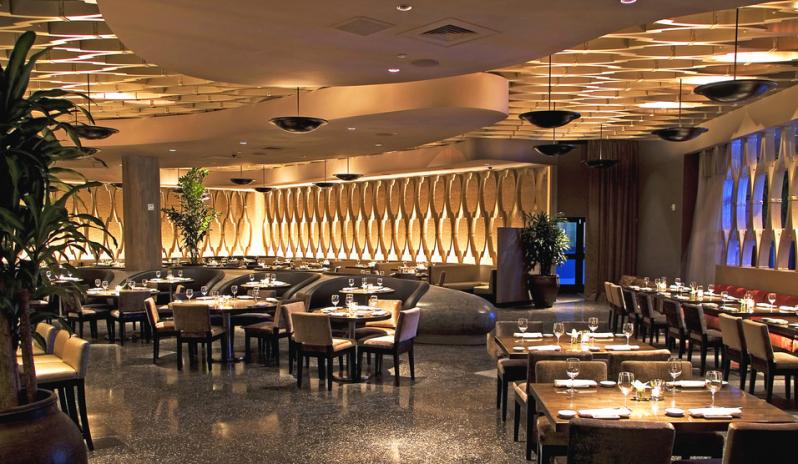 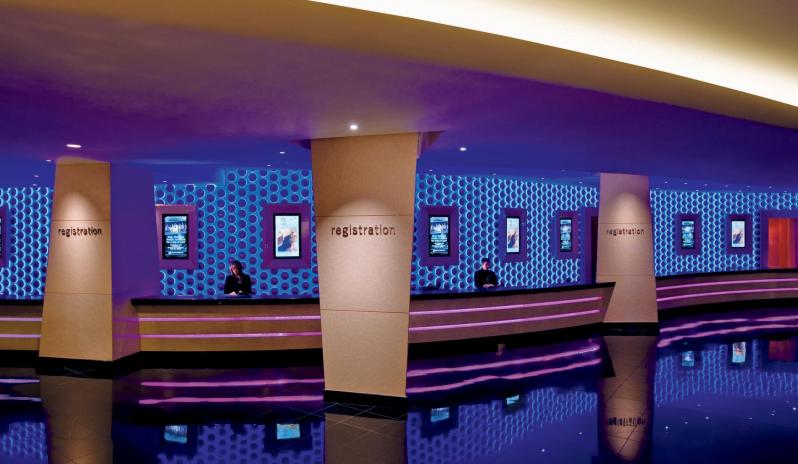 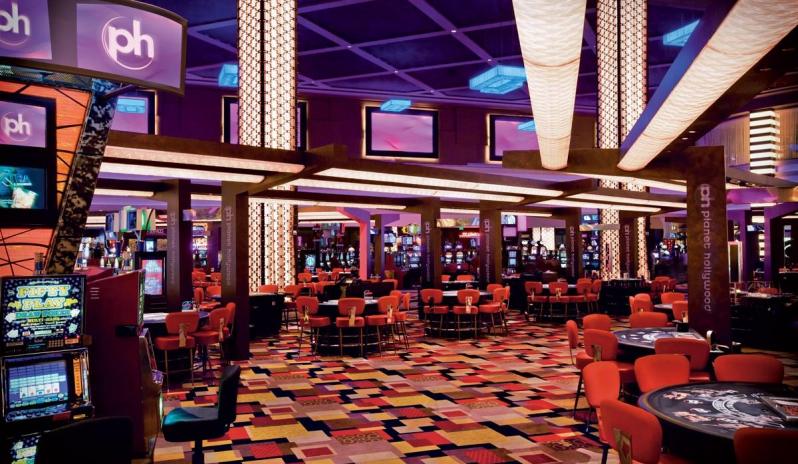 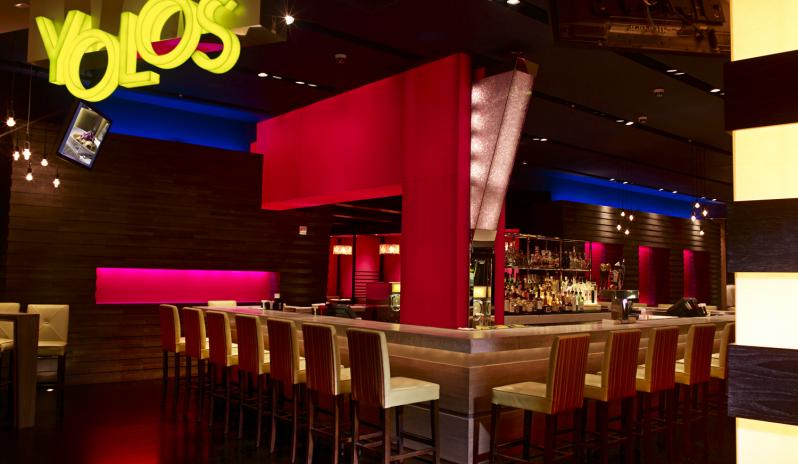 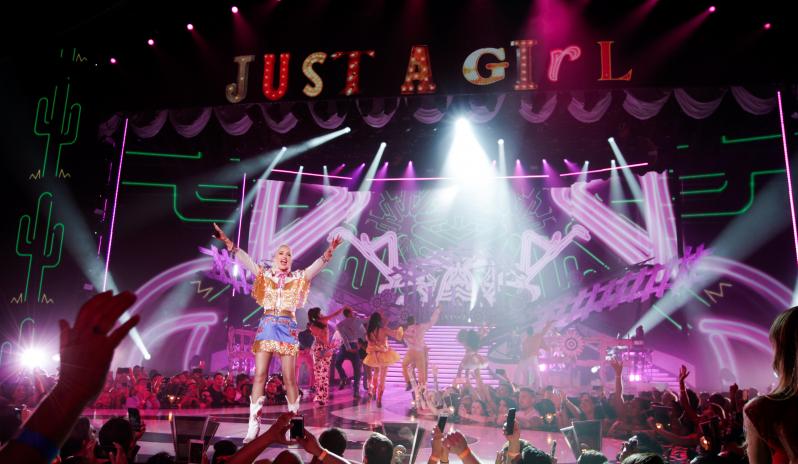 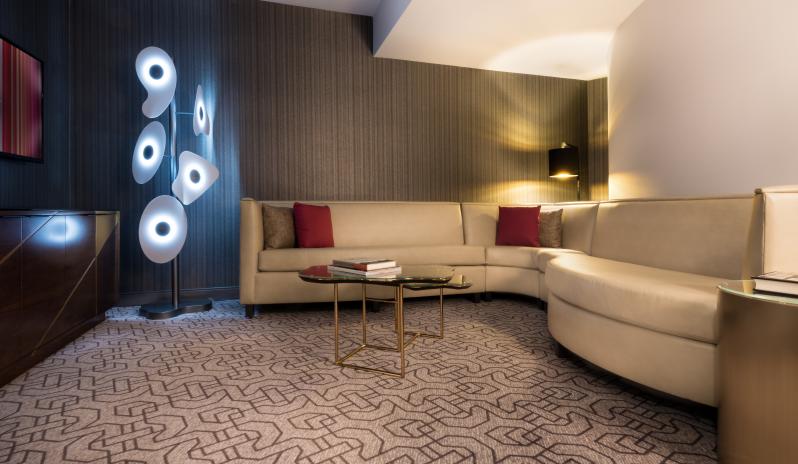 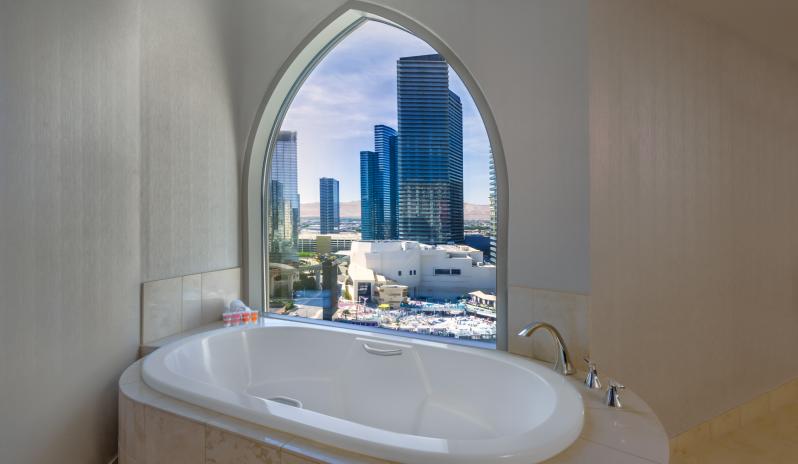 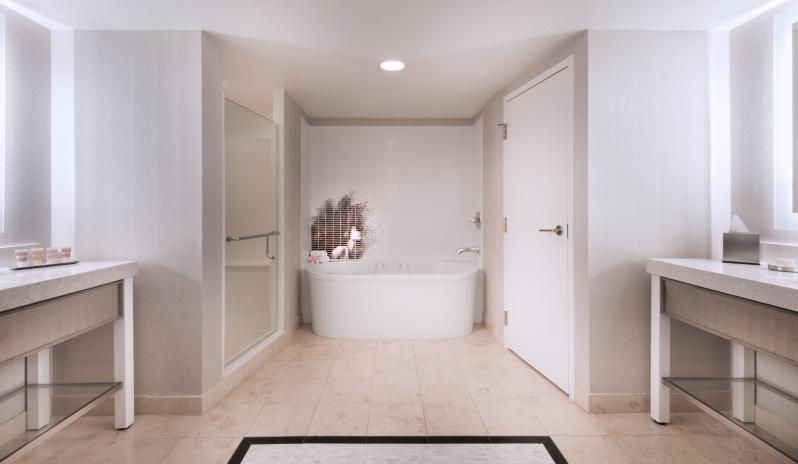 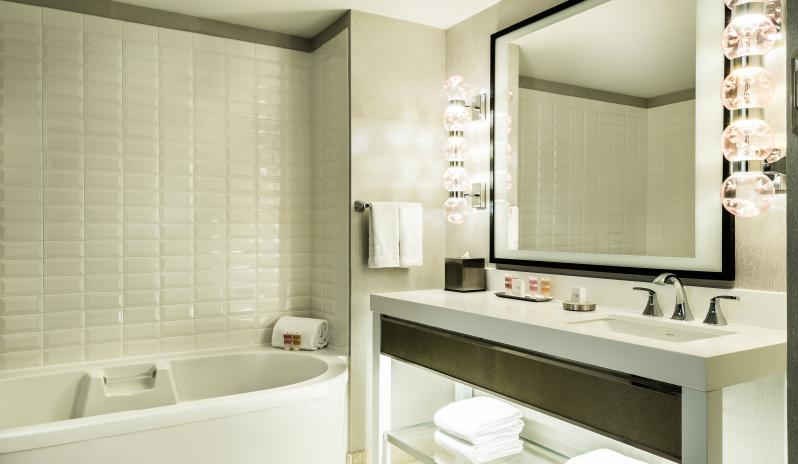 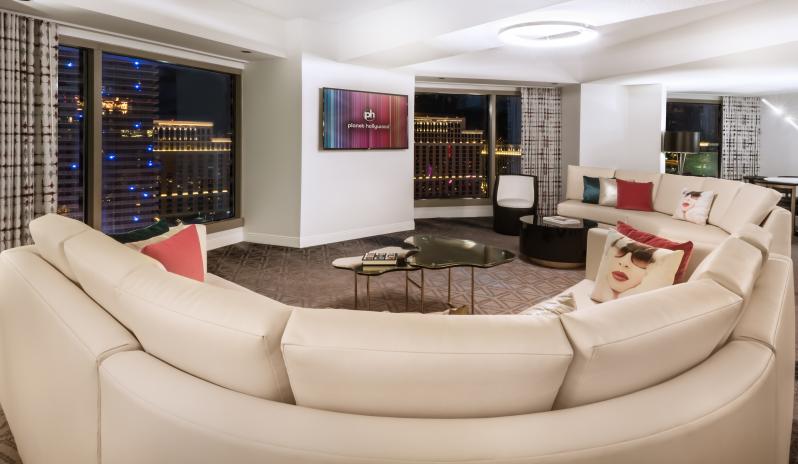 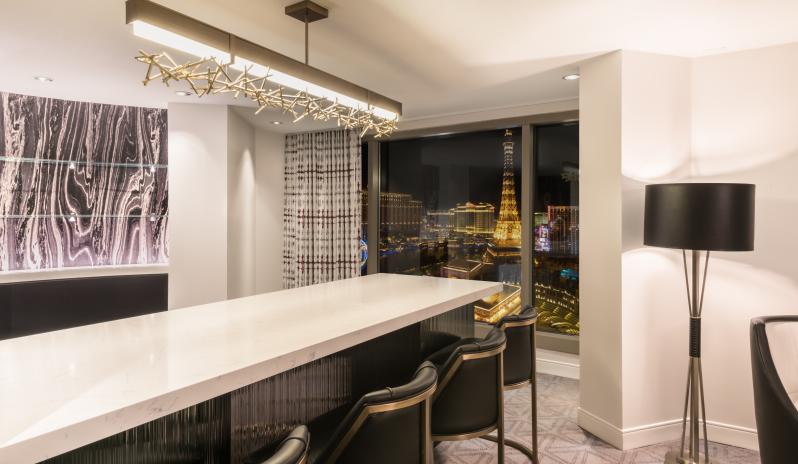 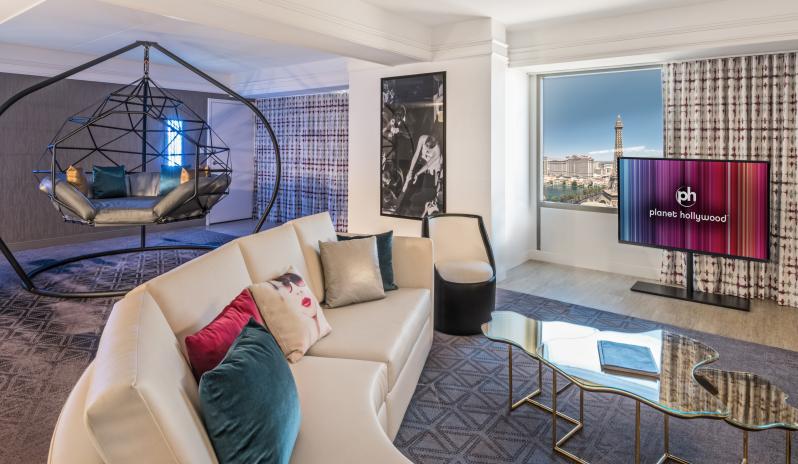 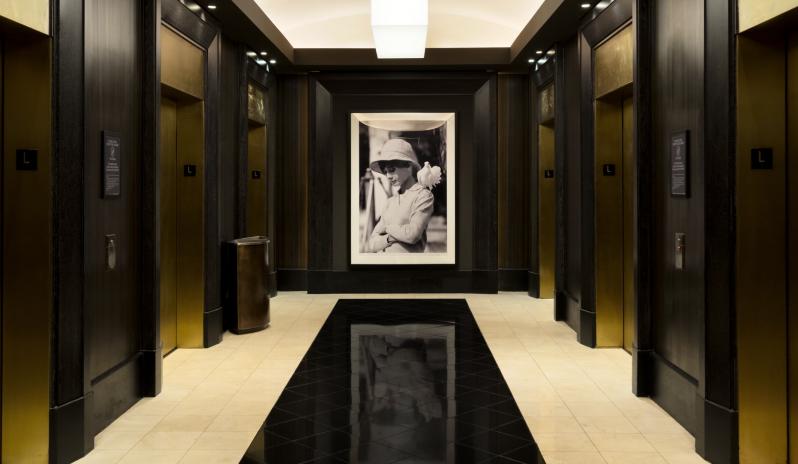 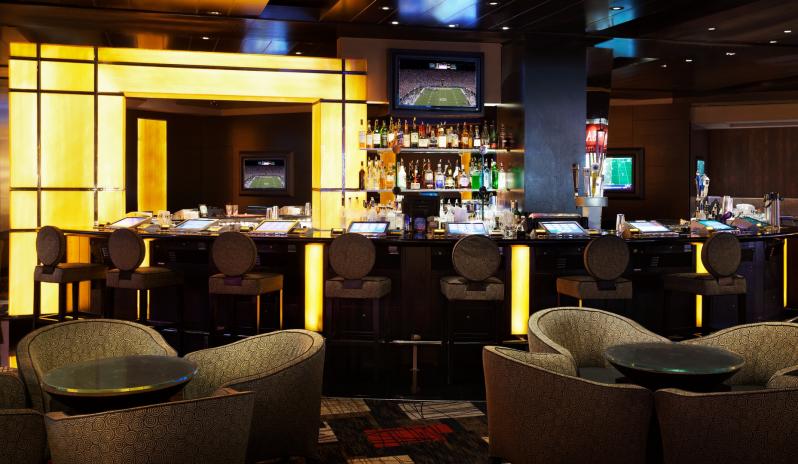 Las Vegas is a city of endless visual stimulation, and you’ll have a perfect spot to view the spectacular sights from your Resort Vista Room. Measuring in at 570 sq. ft., the Resort Vista rooms offer stunning vantage points of the city through five windows, including one next to the bathtub.

There’s just something about stepping into a Strip Suite to make you feel like a star. These stylish 850 sq. ft. accommodations give you room to spread out and relax, along with thoughtful amenities that will elevate your stay to the sublime. Each Strip Suite offers one king size bed.

The second you step through the double door foyer into your Panorama Suite, you will know that you have truly arrived onto the A-List. These stunning ,255 sq. ft. accommodations feature unparalleled views of the Las Vegas Strip. For an even more spectacular stay, you can add a 500 sq. ft. Panorama Connector room.

With more space, more amenities and their own unique style, the Resort Rooms are the perfect choice for the discerning guest. These 560 sq. ft. rooms give you the choice of two queen beds or a king, and each one is decked out with fascinating pieces of movie history. 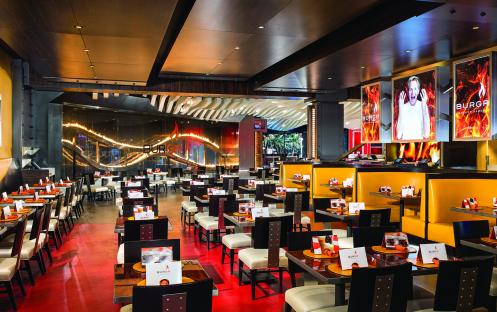 Burger lovers - get ready to sink your teeth into these gourmet delights. Celebrity chef Gordon Ramsay brings his casual burger concept to Planet Hollywood Las Vegas. BurGR is positioned directly inside a center Strip entrance, making it easy to stop in after browsing Miracle Mile Shops or grabbing a frosty drink at Shiver. Dress in loose clothing and prepare to get messy. 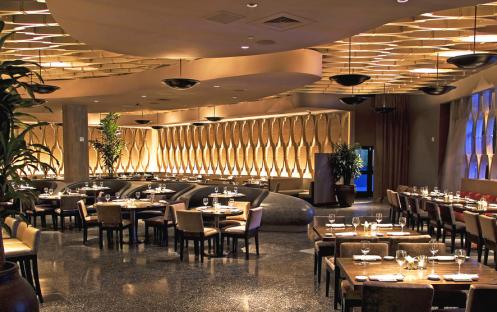 A favorite among celebrities, Koi is a perfect match for Planet Hollywood Las Vegas. This fine Japanese restaurant is popular in the L.A. and New York dining scene. Koi stands out for its Japanese-inspired cuisine with California influences.

When you can't make up your mind what to eat, you don't have to. The Spice Market Buffet features fare from around the world. Mexican, Italian, Asian, Middle Eastern and American. Top it all off with tantalizing desserts and you have the buffet that, this year, was voted #1 in Las Vegas.

Strip House delivers on dishes and décor, creating a steakhouse unlike any other in Las Vegas. The menu by Executive Chef Dustin Rixey is designed to excite all the senses with prime cuts of beef charred to perfection, signature side dishes such as Truffle Creamed Spinach and Goose Fat Potatoes, and the famed 24-Layer Chocolate Cake. The wine list is comprehensive and interesting, with reds to surprise palates and includes a section of organic and green vintages. 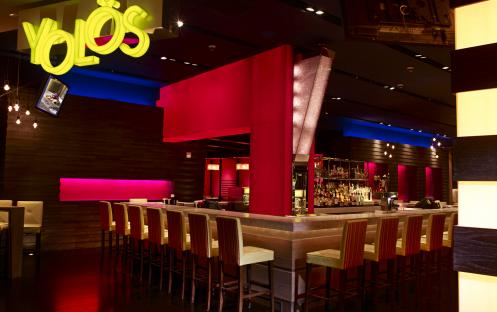 Walking toward Yolös, before you even arrive, you get the feeling of fiesta. The eclectic selection of over 60 tequilas, fresh fruit margarita bar, the fun-loving crowd and the cool and energetic colors of the dining room all serve notice that this urbane cantina is a little different from what you'll find anywhere else in Las Vegas.