California's sunkissed city with a taste for the limelight

Sunset Boulevard, Rodeo Drive, Venice Beach; the romance of LA rolls off the tongue and into our collective consciousness. Holidays don't get more glamourous than a trip to Tinseltown. Enjoy city sophistication, beachfront relaxation, great sports and eclectic fine dining, all beneath year-round sunshine.
Los Angeles

A deluxe hotel in LA's most luxurious destination, the Beverly Hilton is unsurprisingly one of the city's most popular choices.

5 nights Room Only including Virgin Atlantic flights from £1,620 per person

Perfectly located at the top of Rodeo Drive, this 5-star accommodation offers unrivalled luxury in the heart of Los Angeles.

5 nights Room Only including Virgin Atlantic flights from £2,468 per person

The Garland Hotel combines the chic with the luxurious. Perfectly situated just minutes from the attractions, this stylish hotel provides a haven right in the middle of the action.

5 nights Room Only including Virgin Atlantic flights from £1,084 per person

Immerse yourself in the glamorous side of California with this luxurious four-star W hotel located at the foothills of Bevely Hills.

Your holiday in Los Angeles won’t have you searching endlessly for things to see and do. It’s simply teeming with historic museums, contemporary galleries, sporting events, beachlife, theme parks and fine restaurants - not to mention its rich cinematic history, popular music and theatre entertainments. Los Angeles enjoys a warm, balmy climate and is surrounded by a varied topography incorporating both mountain ranges and beautiful Pacific beaches. What's not to love?

Los Angeles boasts some of the most luxurious and opulent hotels, spas and culinary dining experiences around. Take a drive to Beverly Hills and splurge at the famed Rodeo Drive boutiques; visit one of the many art galleries for a day of culture or sit down to some fine evening dining. The City of Angels truly has it all.

Things to do on holiday in Los Angeles

Why not follow in the footsteps of Hollywood’s greatest by walking upon the tiles in which they have been honoured on Hollywood Boulevard’s Walk of Fame. You’ll see the abundance of talent to have graced Tinseltown over the years as you amble along this iconic sidewalk at your leisure.

While you’re there, pay a visit to Grauman’s Chinese Theatre and see the imprinted feet and hands of stars such as John Wayne and Bob Hope. Or perhaps take in a movie at this world famous cinema – immortalised in film and literature alike.

The Los Angeles County Museum of Art (LACMA) on Wilshire Boulevard contains a range of traditional cultural artworks from around the world plus more contemporary American pieces. The Museum of Contemporary Art (MOCA), found on Grand Avenue in the Downtown area, is emerging as one of the city's top culture-vulture haunts, and is free to visit on Thursdays.

If you’re a sports fan, check out the city’s top teams such as the Lakers and the Dodgers. The Dodgers play their baseball in the National League at Dodger Stadium, so grab a hotdog and experience the game at the heart of American culture. Meanwhile the Lakers, over at the Staples Center, play their basketball in the Western Conference of the NBA. This fast paced game will provide both avid supporters and newcomers with a breathless experience, not to mention the chance to spot celebs on the front row.

Movie lovers will swoon on arrival at Universal Studios Hollywood. And there's so much to do: take a studio tour, go behind-the-scenes of a live movie and check out the latest rides, namely King Kong 360 3D created by Peter Jackson, and Transformers™ - the Ride 3D. Edge of the seat stuff; thrillingly unforgettable.

In LA you’ll encounter a Subtropical-Mediterranean climate, with sunshine year-round. You’ll find that January is the coolest month while August sees the warmest weather in this region. On average the annual temperatures comes in at 24 degrees Celsius by day and 14 degrees Celsius by night. But it can reach up to 32 degrees Celsius during some days in July, August, September, October, and November.

Have you considered teaming Los Angeles with other destinations across the US as part of a memorable Multi Centre trip? LA is conveniently placed to be at the very centre of all things California Coast - San Diego, Santa Barbara and San Francisco are all within driving distance. Alternatively you could combine LA with exciting destinations on the East Coast like New York or Washington DC. or, how about Hawaii or the Caribbean as additions to your multi centre? A holiday of a lifetime is in prospect.

Book early for your 2022 / 2023 holidays to avoid missing out on this popular destination. At Kenwood Travel we take pride in arranging bespoke luxury holidays. With over 30 years of experience we’re well placed to send you happily on your travels so call now and book your next trip to L.A today.

A deluxe hotel in LA's most luxurious destination, the Beverly Hilton is unsurprisingly one of the city's most popular choices.

A spot of Hollywood glamour near Universal for that unforgettable family holiday. Wine tasting and a state-of-the-art gym are just two unique attractions at this top LA hotel.

The Garland Hotel combines the chic with the luxurious. Perfectly situated just minutes from the attractions, this stylish hotel provides a haven right in the middle of the action. 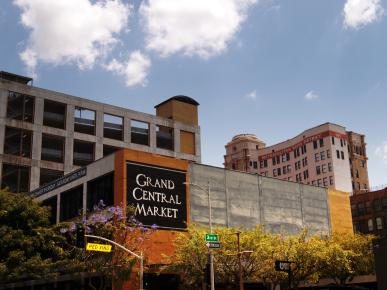 The oldest and largest public market in Los Angeles, Grand Central Market is a must for foodie visitors. The selection here is, much like the city itself, culturally diverse with treats to tempt you from far-flung corners of the planet. When hunger calls, make a beeline to the Homer Laughlin Building, where offerings include everything from barbecue and burritos to bento and freshly-baked bread. 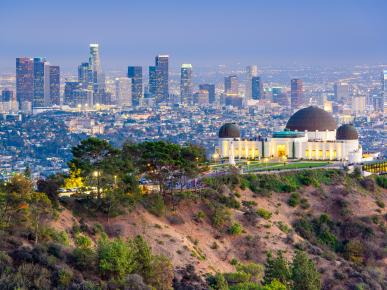 Griffith Park is spread over 4,000 acres of nature, including part of the Santa Monica Mountains, and featuring several hiking and horse riding trails. It’s not all wilderness, however, visitors may also be interested in seeing the Los Angeles Zoo, the Hollywood Sign, the Griffith Observatory, and the historic Greek Theatre. 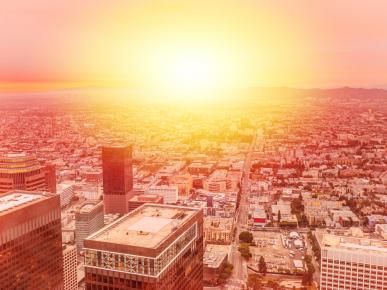 In downtown LA, you’ll find the OUE Skyspace rising 69 floors above the city. Enjoy access to the most impressive views, plus informative displays about the building and the Los Angeles skyline. Pose for pictures at the top, grab a drink and some snacks, or test your nerve with a glass slide that zips you between two floors. Keep your eyes peeled for events throughout the year - from cinema to sunrise yoga.