Hilly haven at the end of Golden Gate Bridge

Attracting 25 million visitors per year, the city of San Francisco is a unique holiday destination which caters to all types of travellers, including food lovers, history buffs, art admirers and architect enthusiasts. Although the actual city is only 8.42 square miles (approximately half the size of Manhattan) it’s packed with plenty of sightseeing opportunities and innovative experiences. Many will recognise the city for its iconic landmarks such as the Golden Gate Bridge and Fisherman’s Wharf, and while they are worth a visit, there’s so much more to the city waiting to be discovered. Visitors will enjoy exploring the many micro-cultures across the region, including the remains of the 1960 hippy movement on Haight-Ashbury, the historic Chinatown and plenty more.

Reasons to Holiday in San Francisco

Food and Drink – From hole-in-the-wall family businesses to Michelin awarded dining experiences, San Francisco is the ultimate foodie paradise. As the city is a melting pot in itself, you’ll find a variety of cultural cuisines at every price level. Be sure to visit Chinatown for some Dim Sum and North Beach for a classic Italian meal. Seafood lovers should definitely make their way to Fisherman’s Wharf to crack into some juicy crabs.

Sightseeing – San Francisco is the ultimate tourist destination, thanks to its world-famous landmarks. The Golden Gate Bridge stands at a staggering 227m tall and stretches out for 1.7miles. You can bike or walk across the bridge easily if you have a spare 40 minutes on your San Francisco holiday. Other landmarks worth visiting are the Palace of Fine Arts in the Marina District, Saint Francis of Assisi Church in North Beach, San Francisco City Hall, Ghirardelli Square and Pier 39 at Fisherman’s Wharf.

Arts and Culture –SF has always been known to be a progressive city, and for years has attracted brilliant minds and ingenious artists. Literary fans can head over to City Lights Bookstore, established by Lawrence Ferlinghetti, and was the birthplace of the Beat Generation movement, Kerouac, Allen Ginsberg and William Burroughs among others. Book a show at The War Memorial Opera House, home to the world-famous San Francisco Opera and Ballet companies. For art enthusiasts, be sure to add a visit to the de Young Museum and the Legion of Honour to your itinerary.

Things to See and Do in San Francisco

Catch a Giants Game – You’ll find many of the Bay Area locals proudly donning their black and orange Giants caps around town. The San Francisco Giants baseball team is one of the most beloved teams in the city, having won the World Series three times recently. If you’re a sports fan, be sure to watch them in action at the AT&T park in South Park, which is only a 20-minute tram ride from Union Square.

Haight Ashbury – Notoriously known as the birthplace of the hippy movement, Haight Ashbury is still retains a quirky charm. You’ll find an array of vintage stores, independent boutiques and coffee shops lined along Haight Street. Golden Gate Park – The park is actually larger than New York’s Central Park, stretching out 4.1 square kilometres. It’s the home of two of San Francisco’s popular museums, the California Academy of Science and the deYoung Art Museum, as well as a Japanese Tea Garden and Conservatory of Flowers. To visit the park, you can take a 20-minute bus ride from Union Square.

Fisherman’s Wharf – A tourist favourite in the city by the bay. Head on over to Pier 39 in Fisherman’s Wharf for some fun activities, restaurants and shops. When the sun’s out you can view the bay and find a friendly sea lion or two sunbathing on the decks. From Fisherman’s Wharf you can hop on the Alcatraz tour boat which takes you to straight to the infamous prison.

Expect mild weather throughout the year with a small chance of rainfall in the winter months. The recommended time to visit San Francisco is September-October where you are likely to see high temperatures of 21 degrees Celsius with very low chances of rainfall. Morning fogs are likely to happen all year round.

Perfectly located in San Francisco's most popular area Fisherman's Wharf, Argonaut Hotel is the perfect base from which to explore this wonderfully vibrant city. 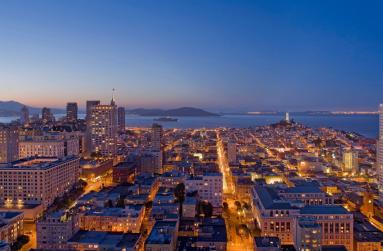 Handlery Union Square Hotel is well located hotel is both welcoming and convenient, raising the bar on value and indulgence.