When the Haywood family entered Kenwood Travel’s #WinOrlandoHoliday competition, little did they know that their one-minute video submission would win them the Orlando holiday of their dreams and the chance to become a Kenwood Travel ambassador. Sara and Andy, and their daughters Olive, 10, and Betty, 9,  won the judges over with their set building, ingenuity and enthusiasm. We spoke to the family from Middlestown in West Yorkshire for an exclusive insight into how their creative video was made and what they’re looking forward to on their holiday to Florida.

Let’s start from the beginning. Why did the Haywoods decide to enter the competition? Mum, Sara tells us, “Florida has always been our dream holiday destination so we all jumped at the chance of getting involved. I loved the fact that Kenwood Travel were looking for a family to be ambassadors and I thought we’d have loads of fun making a video. It was something that we could all do together and this really appealed to us.” 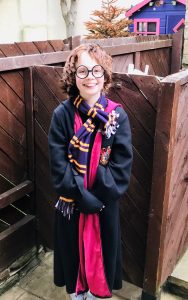 Olive getting into character as Harry Potter

The video consists of several different scenes, including the family having a spa day, the girls flying on their broomsticks dressed in Harry Potter costumes, and using the force as Star Wars characters. The video also features a Kenwood Travel cake and a DIY roller coaster! So how did the brilliant video come together? Well, it started off with a little rhyme, Sara says “For our entry I initially sat down and wrote the rhyme that you can hear on the video […] I knew I had to take some things out and get it to just one minute which was quite challenging.”

While Sara was writing the script, she also began to envision how the video would be filmed, and what props and costumes could be used. “The first thing I made were the Kenwood Travel superhero capes. We already had Star Wars and Harry Potter costumes so I thought it would be great to incorporate those […] We have a bit of a soft spot for Mickey Mouse. Our daughter Betty absolutely loves him. She has had the same Mickey Mouse toy since she was a baby and still takes him everywhere. She’s even got a Mickey Mouse costume which makes an appearance in our video at the end.” 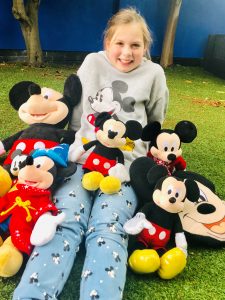 Betty and her Mickey Mouse collection

Of course, without a Hollywood studio and budget, the Haywoods had to put their thinking caps on in regards to  how they could create some movie magic. Despite the lack of resources, they were able to build their own mini theme park in their garden, equipped with a rollercoaster. On building said rollercoaster, Sara says it wasn’t exactly a walk in the park. She says, “I’d no idea how to make one, but I discovered that it’s actually quite easy to make one out of a big cardboard box. We had such a laugh filming it. I don’t know what the neighbours thought though, with us screaming in the garden. It was hilarious trying to get us all coordinated and leaning the same way.”

The video also included a firework display which generated a bit of giggle from our Ambassadors. “The fireworks part was the funniest to film. Grandad filmed the scene while Grandma stood with two phones, using them as torches to make it look like flashes on our faces.”

The entire process took a few weeks. With Dad, Andy working in Marketing, Sara running her own business  and the girls at school, the family had to use their weekends and evenings to film all the scenes needed for the video. However, in the end, their hard work paid off as the Haywoods are now looking forward to their well-deserved trip to Orlando. Since winning the competition, the family have already made a start on their itinerary;“The definites on the list are: Splash Mountain, Runaway Mine Train, Soarin’ Around the World, Test Track, Peter Pan’s flight, the Twilight Tower of Terror and Expedition Everest.  People have been telling us how brilliant the Avatar Ride is at Animal Kingdom so we’re definitely looking forward to going on that. There’s just so much to see.”

As their travel date approaches, the buzz is building for our ambassadors. “We’re all so excited, the rides, the sun, the food, filming our experience there, I could honestly just go on and on. It will be such a magical holiday for us. It’s all we’ve talked about since we found out we’d won […] we’re counting down the days!”

Have you been inspired to go on your own dream holiday to Orlando? Be sure to visit our website or call one our travel experts on 020 7749 9235.