To many Brits baseball is a glorified version of rounders. However, as one of the most widely played sports in the United States, it’s undeniable that Baseball has a huge following. While it may be tempting, as it is with basketball and American football, to regard baseball as purely an American pursuit, there are in fact many countries that have fallen in love with the game. Nowhere is this more apparent than in Japan. So much so, that according to Japan’s National Tourism Organization, many Japanese people are actually surprised to discover that Americans consider it their national sport too. 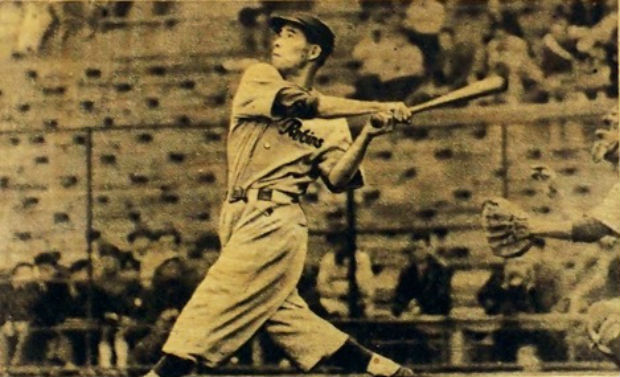 Baseball has been played in Japan for well over a century

But how did a sport invented in the States find its way to the other side of the planet? The most recognised figure in Japan’s adoption of baseball is expatriate professor Horace Wilson. Wilson introduced his students to the game in 1872 while teaching English at the Kaisei School (now Tokyo University). By 1878 Japan’s first team, Shimbashi Athletic Club, was set up by railway engineer and big Boston Red Sox fan Hiroshi Hiraoka thus cementing baseball’s place in Japan’s athletic landscape. Baseball’s rise was also helped by esteemed poet Masaoka Shiki who, in between penning modern haiku, translated many American baseball colloquialisms into Japanese.

The early stages of the 20th Century saw amateur leagues spring up throughout the nation with many college, high school and office teams taking to the diamond. These leagues flourished and soon started to produce some fine players and, after one failed attempt in 1920 a professional league was finally established in 1936. Thirteen years later Nippon Professional Baseball was established which remains the highest level of the Japanese game to this day. Since it’s inception Nippon Professional Baseball has churned out several players who have gone on to play in America’s Major League Baseball for teams including the Boston Red Sox, New York Yankees and Chicago Cubs. 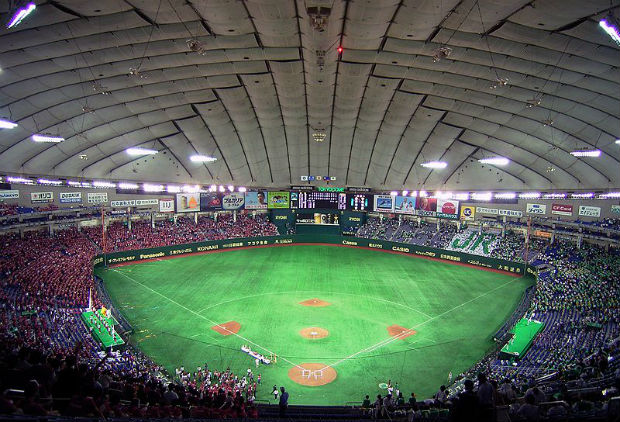 The impressive Tokyo Dome, home of the Yomiuri Giants

If you find yourself touring around some of Japan’s many sights, why not stop off and enjoy a pleasant day at the ball park? Get tickets to see Yomiuri Giants, Nippon Professional Baseball’s most successful team with 22 titles, and you’ll get to step inside the impressive Tokyo Dome (fun fact: “Tokyo Dome” is used as a measure of area or volume in some Japanese parlances). This 46,000 seater stadium is housed under a huge roof meaning you don’t need to worry about the weather. Beneath this hulking canopy the field sits takes up more than 1.24 million cubic metres.

The atmosphere at a game can be very intense with the crowd often conducted by ōendan. These ‘cheering squads’ see it as their sole purpose to create as much noise as possible with drums and horns while others maniacally wave banners and flags to create a pulsating sea of colours. It’s worth enquiring early to try and get tickets close to one of the cheering sections in order to get the authentic experience. If you visit the Tokyo Dome also be sure to check out the National Museum of Baseball which is located within the stadium. Outside of Tokyo, clubs include the Orix Buffaloes of Osaka, The Yokohama DeNA Bay Stars and the Hiroshima Toyo Carp. 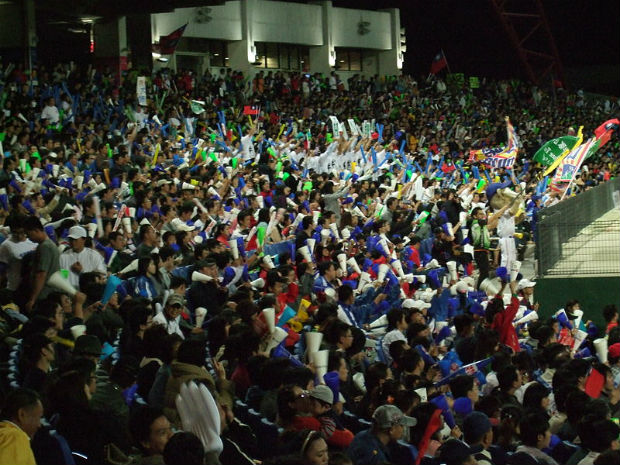 The passionate ōendan get behind their team every single game.

So when you decide to visit Japan, why not take in a baseball game? Even if the sport isn’t for you the enthusiastic crowds, impressive stadiums and colourful culture ensure that your day at the ball park will be an entertaining one.