Prepare to be charmed. The beauty of Barcelona is graced by Nobu’s iconic spirit to create a luxury lifestyle concept for the discerning holidaymaker. Tucked away from the busy streets, Nobu Hotel Barcelona can be found near the city's colourful Eixample district. This elegant property promises a luxury stay for your holiday to Spain, with its Japanese-inspired décor and furnishings, made from natural and organic materials. Guest rooms and suites offer a minimal design to ensure a calm and serene sleeping space. Wooden panels are used throughout the bedroom and bathroom to pay homage to a traditional Japanese home, and bathrooms come with stone sinks and matte-black accents to add a modern touch. Travellers can also visit the Nobu Spa, a tranquil space with three treatment rooms, a sauna, steam bath, whirlpool and a 24-hour gym. Products are derived from local ingredients such as olive oil, herbs, Mediterranean sea salt and organic minerals.

The world-famous restaurant group has found a home in the City of Counts. The namesake restaurant has left a mark in the culinary world, making waves in holiday destinations like Las Vegas, New York, Los Angeles, London and Paris. Enjoy Nobu Barcelona’s elevated Japanese signature dishes and exclusive meals made especially with Catalan flavours. The award-winning restaurant can be found on the 23rd floor, overlooking Barcelona’s city lights and the glistening Mediterranean Sea. For something lighter, visit Kozara near the hotel lobby for a tapas-style Japanese food and cocktails in a casual setting.

Situated in the Eixample neighbourhood, Nobu Hotel Barcelona is just a short walk away from rail links and other public transport options. Since the city itself is compact, you’ll be able to access tourist spots and locations within 10 minutes. From the hotel you can visit the Montjuic Olympic area and museum quarter as well as being close to the the Fira de Barcelona conference centre, cruise ship terminals and the El Prat International airport. The quiet location means that you can take a peaceful break from the hustle and bustle of Barcelona, in between your activity-filled day, while from the hotel itself, panoramic views of the sea and city are afforded. 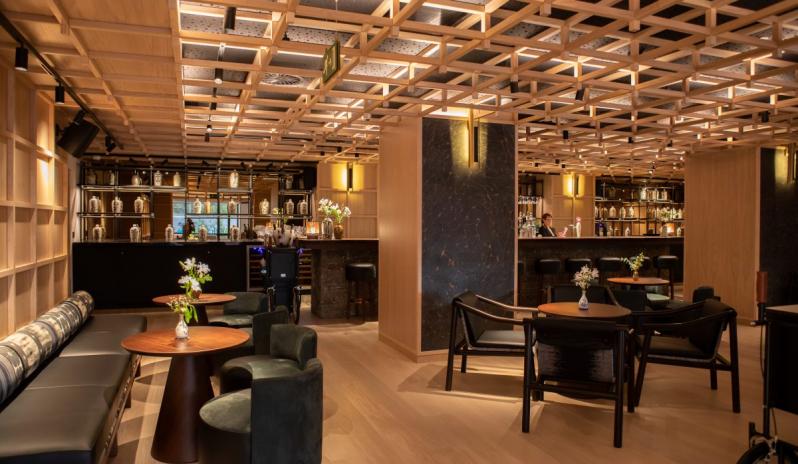 The Zen Suites offer an expansive layout with a separate lounge area, ideal for relaxing or gathering with friends. Suites are located between the 6th and 22nd floor offering spectacular city views.

The Deluxe Skyline Rooms are located between the 12th and 21st floor and offer spectacular views from soundproof, floor-to-ceiling windows.

The Premium Skyline Rooms are located between the 12th and 22nd floor and offer breath-taking city views from soundproof, floor-to-ceiling windows. 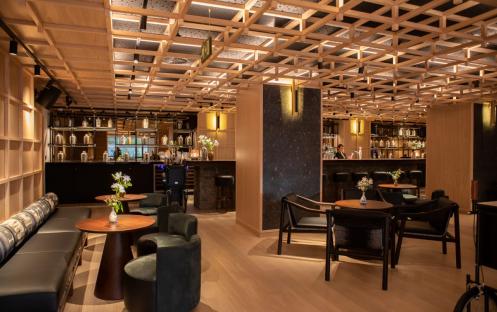 Located on the lobby level of the hotel, Kozara (“small plates” in Japanese) offers dishes that creatively fuse traditional Japanese cooking with local Catalan influences. Stop by the bar and relax with friends and family over wine, beer, and unique cocktails combining local spirits with Nobu-Style bites.

Kick off the party or come to unwind. At Nobu Bar, the drinks are stylish, the sake is scrumptious, and the bites are delectable. Sip on creative cocktails and choose from a wide list of wine and liquors from around the world including an extensive Champagne menu.