The Island of Eternal Spring

Tenerife is the largest and best-known of Spain's Canary Islands. Famous for its idyllic golden coastlines and year round summer climate, it is the ultimate destination for sun-seeking holidaymakers. However there is more to this postcard-perfect island than sun, sea and sand. Tenerife boasts breathtaking natural wonders, dramatic landscapes, picturesque villages, diverse wildlife, thrilling adventure parks and lively night spots which all combine to make a truly unforgettable experience.

With a wide selection of high-end hotels and resorts scattered around its idyllic coastlines, Tenerife is the place to be for a luxury escape. We at Kenwood Travel specialise in tailor-made luxury holidays and have hand-picked for you some of the very best Tenerife accommodations.

Things to do whilst on holiday in Tenerife

Ride a cable car up Mount Teide - Spain's highest peak and the third tallest volcanic structure in the world. From here you will be spellbound by majestic panoramas of the island as well as views of Gran Canaria, La Palma, La Gomera and El Hierro in the distance. Teide National Park also boasts fantastic hiking trails.

Embark on an ocean adventure in a submarine safari; with just a small number of commercial submarines available across the globe this is certainly a unique experience. Alternatively, stay above water and sail out on a catamaran for whale and dolphin watching expeditions.

Tenerife offers endless possibilities for adventure. The Siam Waterpark provides terror-inducing slides, child-friendly water rides, and a man-made white sand beach, catering to all visitors. Loro Parque is a Grand Zoo with a sealife section hosting incredible ocean creatures such as orcas, penguins and sharks. Las Aguilas Jungle Park offers fun jungle obstacle courses and is famous for its free flying birds of prey. It features lions, tigers, monkeys and leopards among other exotic wildlife. Plus, performers put on death defying spectacles in which they somersault from an 82ft plank into a small pool.

Finally, Tenerife's flamboyantly colourful carnival is unmissable and second only to that of Rio.

Described as the 'Island of Eternal Spring' Tenerife enjoys plenty of sunshine and little rainfall all year round. With highs of 25ºC in the summer and lows of 17ºC in the winter you'll have plenty of tanning opportunities whatever time of year you go.

Kenwood Travel have been experts in affordable luxury holidays since 1977. Our dedicated travel specialists will handle every detail of your holiday for you from the get go, so all you have to do is sit back and relax. However, since Tenerife is a popular destination beat the rush and be sure to book early so that we can bag you the best possible price on your preferred dates.

A highlight of any world tour. Party like a rock star and relax like royalty at this stunning hotel comprising 3 pools, 10 bars & restaurants and so much more.

Surrounded by striking natural beauty with the Atlantic Ocean as a backdrop, this tranquil getaway boasts a 72-par golf course, an exquisite spa and two Michelin-starred restaurants. 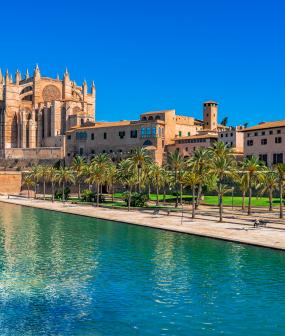