Enter into a world of Las Vegas luxury when you stay at the iconic Caesars Palace Hotel and Casino. The largest hotel on the strip boasts an elegant setting, which pays homage to the grandeur of the Roman Empire. With over 3,900 guest rooms and suites, located in the hotel’s five towers (including the latest addition, Julius Tower), you will have the opportunity to customise your stay with an extensive list of room types, amenities, views and locations. Want to go big on your Las Vegas holiday? Treat yourself to Caesar Palace luxurious suites including, Forbes Star Award winning The Laurel Collection by Caesars Palace, the Anthology Collection suites and villas, and the 181-room Nobu Hotel Caesars Palace.

From celebrity restaurants to a casual dining experience, there will be something to suit every mood when staying at Caesars Palace. In the mood for a good old English pub? Gordon Ramsey, star of Kitchen Nightmare and Hell’s Kitchen, has opened his own Pub & Grill at the Las Vegas hotel, serving Yorkshire ale batter fish and chips as well as some other British classics. Food Network star, Bobby Flay, and award-winning celebrity chefs, Nobu Matsuhisa and Guy Savoy, have also opened their own respective restaurants. For a fine dining option, be sure to visit the classic American restaurant, Searsucker, and try a 5-star Chinese dish at Mr. Chow. For a casual setting, Beijing Noodle no 9 and Serendipity 3 are also great spots.

With live entertainment, a selection of bars and nightclubs and a shopping centre all within the hotel, you wouldn’t have to leave the premises during your holiday to Las Vegas. The Colosseum is a prime location for some A-list entertainment. American comedian, Jerry Seinfeld, and musicians Elton John, Celine Dion, Rod Stewart and Reba, Brooks and Dunn all have or have had residencies at the concert hall. Also residing at Caesars is the carnival spectacular, Absinthe, a wild and sexy event with rock n roll style acrobats and lively entertainment. Don’t miss out on the nightlife, especially the multi-level, OMNI nightclub featuring panoramic views of Las Vegas. Caesars Palace is also home to VISTA cocktail lounge, Spanish Steps and the Lobby Bar.

Please Note: This hotel charges a resort fee of $51 including tax, per room per night, and would cover the cost of extra facilities such as wi-fi connection where offered. This rate is subject to change, is not included in your holiday price and must be paid locally. 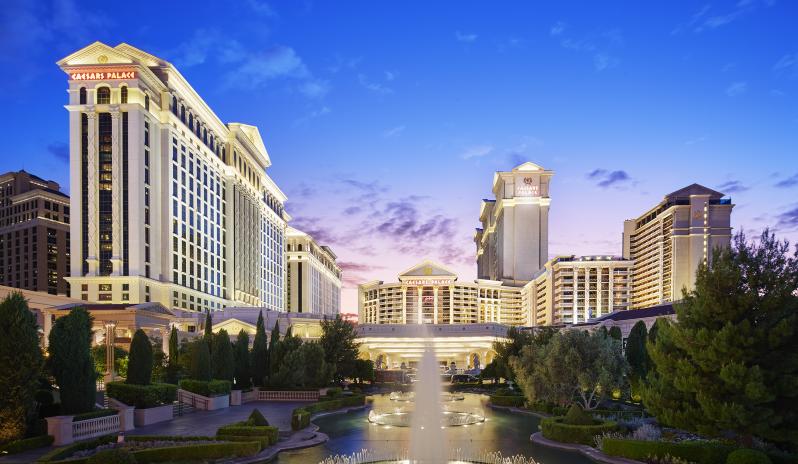 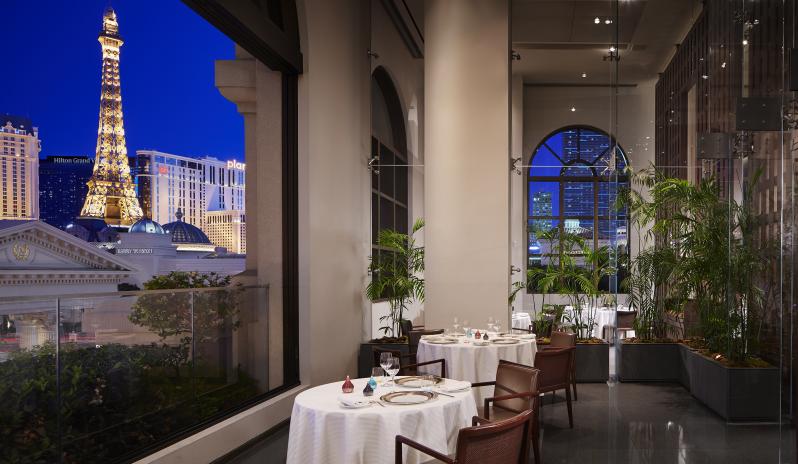 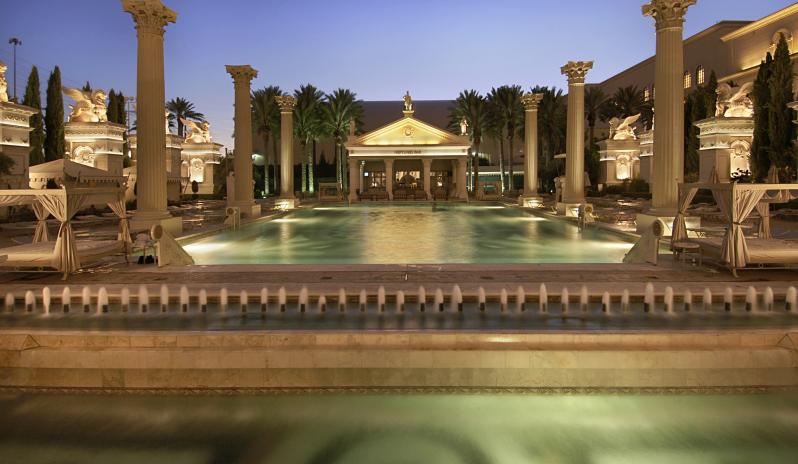 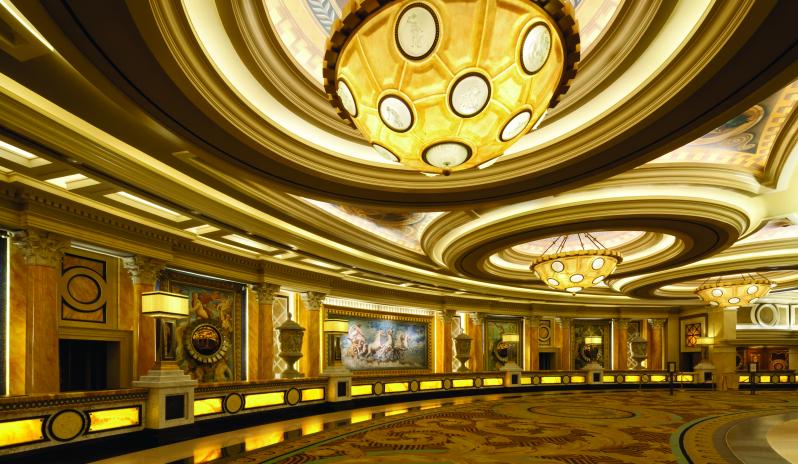 Cool and stylishly modern, the Deluxe Room surrounds you with modern convenience and luxury, with two LCD TVs (one embedded in the bathroom mirror), professional desk space with leather executive chair, and an oversized walk-in shower with dual rain bath showerheads.

The hotel's newest tower’s ample Deluxe Rooms will indulge you in tasteful opulence, thoughtful functionality and plush comfort.  The marble bathroom compliments the experience in true style with dual sinks and TV easily viewable from the spa tub.

Lavish luxury reigns supreme in Palace Tower Premium Rooms, providing a genuinely comfortable bedroom with plenty of space to stretch out.  The room’s most unique feature is its dual marble bathroom, united by a dual shower and featuring an oversized spa tub and bidet.

Cool and stylishly modern, the Deluxe Room surrounds you with modern convenience and luxury, with two LCD TVs (one embedded in the bathroom mirror), professional desk space with leather executive chair, and an oversized walk-in shower with dual rain bath showerheads.

Inspired by Chef Bobby Flay’s extensive travels to Italy and the Amalfi Coast, Amalfi will transport guests to the Mediterranean with its enchanting blend of coastal ease and fresh, bright flavors. 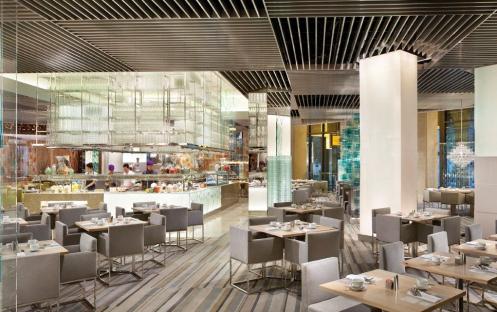 Bacchanal Buffet presents nine distinct restaurants in one location, featuring a team of specialized chefs who oversee the preparation of the majority of the food in front of the guests. This Las Vegas buffet is filled with familiar comfort foods prepared in the freshest manner utilizing the finest ingredients. With more than 500 dishes to choose from daily, every guest is sure to satiate their craving at Bacchanal Buffet, whether it's one for prime rib, chilled king crab legs and roasted South Carolina shrimp and grits, or oak-grilled lamb chops, hand-made dim sum and baked-to-order soufflés.

Walk through a dramatic entrance flanked by gigantic fishtanks into an authentic taste of Northern Chinese cuisine at Beijing Noodle No. 9. Beijing Noodle No.9 is the kind of casual noodle shop you'd expect to find on the bustling streets of Shanghai, Hong Kong or Beijing. Under the direction of Executive Chef Li Yu, the kitchen cranks out mouth-watering selections of soup, dim sum, noodle and rice dishes and chef's specialties. Highlights of the menu include Chef's Handmade Noodle with Sliced Pork and Mushroom, Imperial Seafood Soup Dumplings, Pan-Fried Shrimp in Chinese Wine Sauce, Sauteed Diced beef with Macadamia Nuts, Beijing Salt and Pepper Chicken and Chef Yu's live seafood selection. With an inviting and warm atmosphere, extended hours and casual counter seating, Beijing Noodle No. 9 is the perfect spot for an authentic taste of the Orient, day or night.

Located in front of Caesars Palace, the restaurant boasts floor-to-ceiling windows overlooking the famous Las Vegas Strip, red and blue design details in the show kitchen, a private dining room and a contemporary bar serving the latest trends in mixology. The Red and Blue kitchens serve up modern lunch and dinner menus including Hell’s Kitchen signature dishes made with the highest quality ingredients.

Nobu restaurant at Caesars Palace is the only location in the U.S. to have Teppan tables and you can book an exclusive experience. The Teppanyaki experience follows the Edomae of eating sushi, one piece at a time. With the crafted Teppanyaki tasting menu, guests enjoy every course cooked right in front of them. Each bite is served with Nobu’s recommended signature sauces. Every item is exclusive to the Teppan tables and not served with any other Nobu dining experience.

A night at Rao's is a truly a magical experience. Whether in New York, or at Caesars Palace in Las Vegas, the Rao's family makes sure you feel as if yours is the only table in the room. Frank Pellegrino Sr., Frank Pellegrino Jr., and Ron Straci, have been proudly executing perfect dinner experiences for decades - first in New York - now in Las Vegas. At Rao's Caesars Palace, the food is prepared as in New York: Simple. Honest. Italian. The greatness of the food stems from the quality of the products. The kitchen uses fresh, high-quality ingredients, such as homemade roasted red peppers, freshly grated Pecorino-Romano and Parmigiano-Reggiano cheeses, Felipo Berio olive oil, and certified San Marzano plum tomatoes from Italy. For more than 110 years, that's the way the family has cooked in New York, and that's not about to change in Las Vegas.

Restaurant Guy Savoy is the only place in America to experience the elegant cuisine of Guy Savoy, one of France's most revered and award-winning chefs. He's received three Michelin stars, an entry in the Larousse encyclopedia, the Legion d'Honneur from the French Minister of Agriculture and was voted France's Chef of the Year by his peers.